A civilization trapped in the confines of near planet orbit has found an enemy menace from outside of its solar system. Alerted by scientists monitoring the skies, we watched, waited, and created. The Gysolian defense grid is now in your hands, Commander. With time running low and the enemy closing in our last hope is the Durkham-class Defense Carrier.

Can you help lead us to victory?

This mod is basically my attempt to show that Transcendence is more than just Domina and Oracus and we can make other games too, like tower defense among other things.

Scrap
Scrap is the main currency in the game. It is used to spawn stations and is only earned when a wreck is scuttled by the Starbase. The Starbase's scuttle radius is around 60 light seconds, so the wrecks in the asteroid belt from the last war are unreachable.

Playership
The main playership right now is supposed to be a carrier but I can't do carrier mechanics yet. It's got an omni sunflare, and type four stealth missiles. I'll fix up the playership later.

Game Length
Also right now there are 11 waves, and one game lasts ~12 minutes if you can get through all of them.

Upgrades:
I also still have to do upgrades. I have a list floating around somewhere, and I'll probably get to them later.

Refueling:
Refueling is also a hassle. I'll make it cost scrap sometime soon, and allow you to install some kind of solar panel array, but right now just dock with the Starbase and refuel for free.

ALSO: I NEED GRAPHICS. If anybody wants to pitch in some graphics so that I don't have to reuse Vanilla, don't hesistate :3
Tutorial List on the Wiki and Installing Mods
Get on Discord for mod help and general chat

Also, the new interiors of enemy ships made the last rounds a bit more difficult than I imagined, but it's doable if you plan right and use the sunflare properly.
Tutorial List on the Wiki and Installing Mods
Get on Discord for mod help and general chat

im downloading this mod asap to see how it goes!
Top

Updated at 12 downloads (thanks guys/girls!) and changed two things:
1. Intro screen doesn't bleed like Bloody Mary is going to get you through the screen
2. Removed devicedisrupt so that shields on ships are guaranteed to recharge and come back (this might prevent some waves from clearing).
Tutorial List on the Wiki and Installing Mods
Get on Discord for mod help and general chat

So hard! I tried countless times and still can't survive wave 11. I feel the player's ship should be a bit faster, or at least turns faster. Also the defenses are too fragile. One or two missiles can take out a turret, I think. (Didn't look in the code) Most of my defenses (sometimes all) are gone in the 9-10th wave, that is in one wave. Before the wave starts. I have like four hangars, four missiles, and six lasers. Then the Drakes came, and all of them are blown to bits in seconds. They should be sturdier I think.

To the technical issues, First, the missile defenders do not show their health when targeted. Maybe because you use the beacon as their base in coding? Second, this may be my eyes playing trick, but the stations seems to be moved when being fired at with missiles. I think I've seen a laser defender being pushed farther from the hangar I placed it to protect. Third, our income seems to be a bit random, because sometimes the enemy doesn't leaves wrecks. I think as this is a TD, the enemy should have 100% wreck chance. The wrecks may be destroyed and that's enough randomness in the income, IMO.

Anyway, great mod! And I know it's not completely finished. This might become one of the best adventures ever.

Yes, look at my avatar, I have a wyvera type ship.
Top

A couple of questions:
- Why don't you use the credit system instead of scrap ? Wouldn't that make it easier to manage the money ?

- I would like to be able to see the incoming ships from far away on the map.(sort of how the Salvager ship was visible on the map in the past) Since the playership is painfully slow, it could make it easier to manage the defences

@sun:
Yeah, there are a lot of missing features in the game. Here are a couple of (potential) upgrades you could tech into by the 9th wave:
-stations have regen
-stations have shields
-playership earns the ability to upgrade wingmen
-upgrade wingmen for the Hangar Bays
-upgrade a hangar bay to a cruiser bay so you have something with interior to fight for you
-upgrade the scuttle radius of the Starbase so you can get more income from the wrecks in the asteroid field
-have a mining station to generate some income from the asteroid belt (you'd have to defend it but it would give you more scrap than scuttling)

Also I need to revamp the playership - it's also supposed to be a carrier. I just need to work on carrier mechanics and soon you'll be commanding enemy gunships as your own

It was supposed to hang back while you use the fighters to engage enemy fighters and be able take on five enemy drakes (destroying the five drakes).
It's one weakness would be placement-- and that would be your ultimate weakness.

I'm pretty sure missile defenders show their health, but if not, take screenie?
Also all of the 'stations' are ships so that would explain their movement after being hit by a momentum weapon. In the future I will make unique enemies that don't have momentum so turrets don't move when hit by missiles.

@digdug:
I didn't want to be bogged by anything Vanilla so I wanted to do a new currency system. I'd also like it so that you could make 'energy stations' to power the laser defenders, and I'll see where things go from there.

As for incoming ships, I can set them as target destinations and as markers on the map. The only thing is that your viewport would be bogged down by all the red 'unknown hostile' target indicators. I don't know if that's an elegant solution though.
Tutorial List on the Wiki and Installing Mods
Get on Discord for mod help and general chat

One thought from reading up on system generation: The edge of the star's glow is supposed to be the outer edge of the liquid water zone. You should therefore theoretically extend the star's glow to the play area. You'd mentioned the possibility of a solar collector as an upgrade after you make fuel cost something and this would also make that easier to implement.
Literally is the new Figuratively
Top

Nice one Atar. I'll add that to the TODO list since that would make the solar collector make more sense. Maybe other forms of energy (like nuclear fission, etc) can be added, but later.
Tutorial List on the Wiki and Installing Mods
Get on Discord for mod help and general chat

@Sun: Have you seen this on the missile defenders? 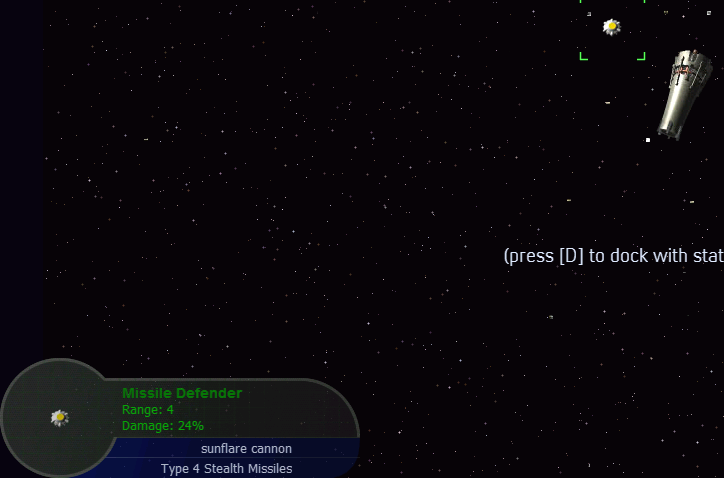 No, when I targeted it, no damages were shown where it should be shown. All other objects shows their damage normally though. Weird.

Yes, look at my avatar, I have a wyvera type ship.
Top

cool mod um going to download it. I will let u know of my experience
Top

known issues:
-upgrade screen does NOT upgrade properly at the moment.
-sometimes if you have too many fighters the amount of particles lags the game

I think that's it, if there's any questions/ideas on how to improve, please say so!
Tutorial List on the Wiki and Installing Mods
Get on Discord for mod help and general chat

Yes, TSG was in the *very* back of my head when I was doing this. I'm going for a more fleet based approach rather than a tower based approach though (next update you can have more capital ships to back you up, etc).
Tutorial List on the Wiki and Installing Mods
Get on Discord for mod help and general chat