It'd be nice if we could see what enemy ships are equipped with, without having to destroy the ships and examine their wrecks. I think this would especially be a big help for new players, who may not necessarily realize that enemy ships are playing by the same rules that the player's ship is.

Something like the gladiator display would work, though that's not very compact. Whatever it looks like, it would of course need to not leak information about unidentified items -- if you scan an Iocrym Sentinel, you should just see the various "alien devices".

I think that is too much, as it can be seen on intro screen.
Download Transcendence mods from Reinvented Workbench Project!
Semesta I.G.C v1.37
Great corporate that feature a new items and challenges!
YourCORP v1.16
Build your very own corporation!
Trade Item Extension v1.15
New misc items, foods and resources!
StrongBox v1.4
Open it up to get a random equipments!
Flare Weapons v1.6
New weapons that have very unique abilities!
Click this link!
Top

I've got to agree here. I don't see a practical use for the information. That said, I'd love to see more ROMs added to the game with various functionalities.
Permadeaths: Vanilla, CC (No Domina Powers), EP

There are extensions that add ROMS & devices to the game for this idea already - And as a device, rather then a ROM, I see it being more of a practical unit. I wouldn't want my screen blocked with info every time I target a Himal Interceptor.

Other Usable items can be found here :
http://xelerus.de/index.php?s=mods&c=Usable
Flying Irresponsibly In Eridani......

The practical use isn't so much for experienced players as it is for newbies. People who aren't familiar with what all the weapon effects mean, or how to recognize a Gotha seeker vs. a Stiletto. The intro screen doesn't suffice because it only shows you a small and random selection of ships (newbies are not going to know how to choose what ship to show). More importantly, you can only look at it when you aren't playing the game.

And it shouldn't be much clutter: you'd only need 3 or maybe 4 short lines of text for most ships. Armor, shield (if present), primary weapon, launcher (if present). But if you were worried about clutter, I suppose this is the kind of thing that could be configurable, e.g. from the player ship screen.
Top

It still feels like something that would excessively complicate the interface, especially if the player is expected to configure it. A ROM that let the user press a secondary key to highlight the interior compartments of on - screen enemies might be useful, though. It'd be useful to all players, and it wouldn't interfere with the normal targeting. It'd show some capship equipment and provide visual feedback to player trying to target specific systems.
Permadeaths: Vanilla, CC (No Domina Powers), EP

Great idea, Derakon and FatRatKnight.
The ROM idea is a great one and I've started playing about with it. I've started a topic in the Drawing Board section with what I've come up with so far.
https://forums.kronosaur.com/viewtopic.php?f=25&t=8535

Not quite what was meant in the OP but the attached Enemy Intelligence mod is something I wrote a while back, thanks to an excellent idea from Shrike in a Ministry topic (also thanks to digdug and NMS for help modifying the code). Mainly, as Derakon says, to give info to beginners.

It uses the Korolov/gladiators ship data screens code to give info on Ungoverned Territory and Outer Realm enemy ships.

Thinking about it, it probably needs a section covering New Beyond enemy ships as well. The standard Korolov ship data screens do some of this but don't cover some ships like Zulus and Borers. This could show in Starton Eridani.

I never finished it because I'm slow at coming up with the ship blurbs/text descriptions. Although it works in 1.8b1 (I checked Comm Fortresses anyway) it needs a rewrite as the Korolov code has changed slightly. If anyone could write some text descriptions for the ships it could be released. It's on the TODO list but so are the other 20 mods I'm working on!

EDIT: I've released an upgraded version of this mod on xelerus; http://xelerus.de/index.php?s=mod&id=1598
It includes New Beyond enemy ships and fixes a bug where there was no info available at St Kats Arcology. Only works in 1.8b1 and above. 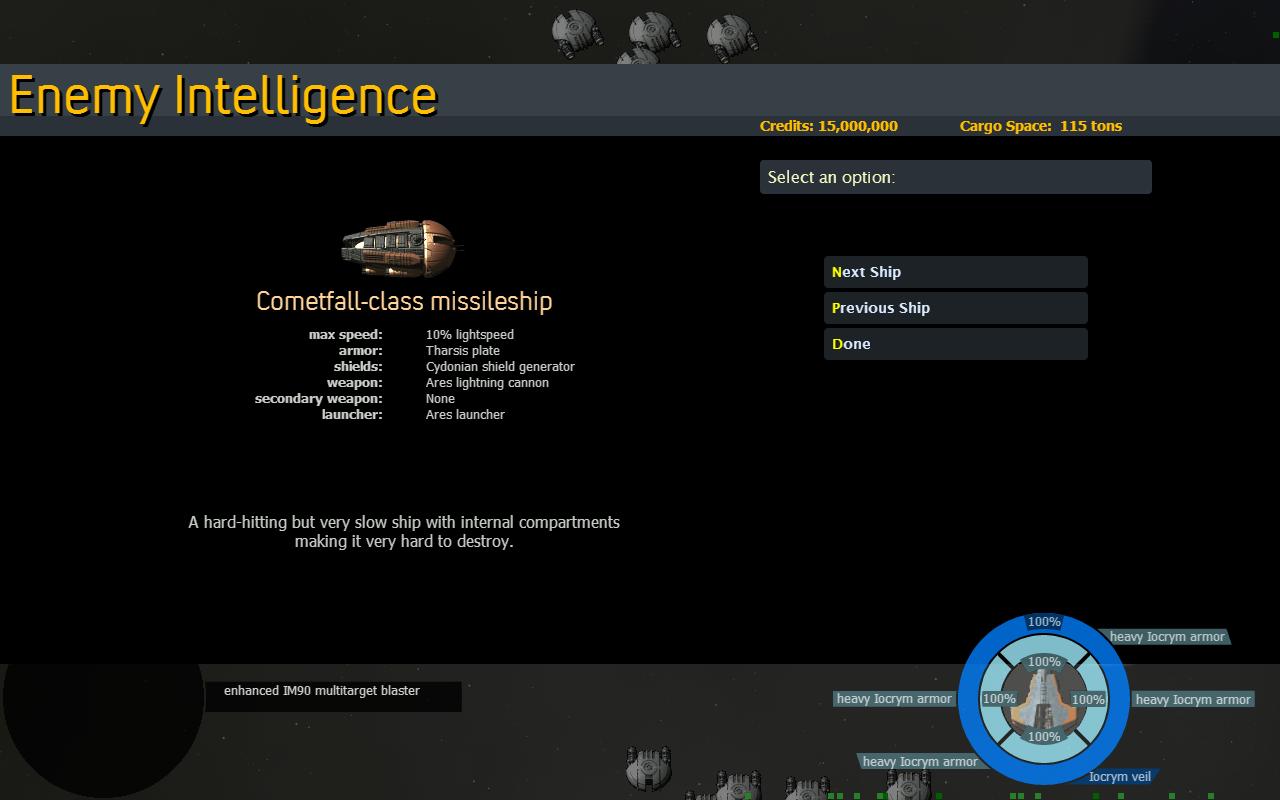 Oh cool! Glad to see someone had the same idea.

I'd say it's fine to release even without blurbs for all the ships.
Top

I just want to target things. If targeting program will remain an acquired upgrade, then I just want the basic functionality. If equipment revealing or scanning will clutter UI, that should be a separate item, perhaps adding an Invoke function for the otherwise mostly useless quantum CPU. (Device slot is too precious to waste for few one-off cubes, most of the time.)