A Mediocre Player's Blog on Anacreon

I am a mediocre player playing Anacreon right now. My current IGN is Transentin and my empire is called Order of Korhal with Ranzig as my capital. Before starting this blog, I had 2 empires, both ended quite disastrously.

First, let me review my mistakes:

Empire # 1(don't remember name)
-Serious rebel problems
-Minimal Use of Trading Hubs
-Few Trillium Planets
Result: The realization of my poor management led to my abdication of my empire.

This was before I read the Forums and realized 50% of my actions were of very poor choices. After reading the forums, it lead to the immediate abdication of my empire.

Empire # 2: Ranzig, Ranx Confederacy
-Staying as Fire & Movement for far too long
-No construction of starships
-Consumer planets in a Trading Hub Trade node
-Aggression against a Slightly Larger Neighbor with Jumpships
-Failure to mass a large enough navy/army to protect all my planets
Result: Full Annexation of my 100+ planets against an opponent of similar size in 1 day.

What I am doing different this time:
I am going to play much slower this game and not overextend. In addition, it is also the first time I spawned close to a vast nebula. This led me to a rare play style of ramjets. Here is my 3 day old empire:

Opinions and constructive critcism would be appreciated. 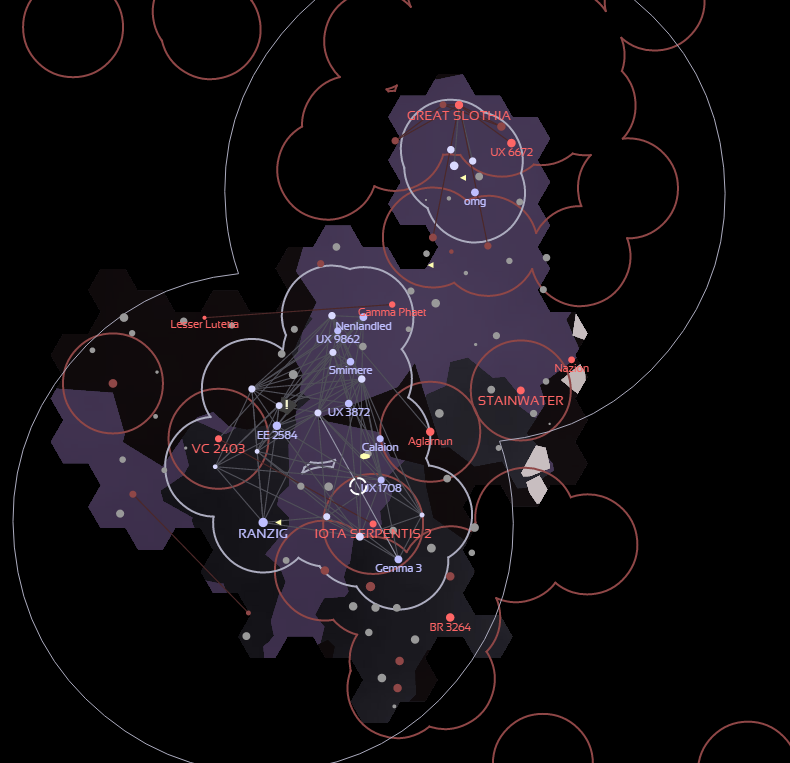 I own the Ashes of Aelion and Azorena empires. I was wondering what happened there as I saw Bismalia had taken your capital. The other planets probably defected.

I don't use trading hub planets. It seems superfluous whereas the main problem with trade is lack of range beyond what trade hubs can fix without wasting many planets. More planets means more planets to defend, ergo planets with zero production are not good.

Entry #1
While playing today I noticed that ramjets do quite poorly in combat against HEL cannons. In addition, my ramjets would suffer high casualties if not grouped against any kind of defenses. Lastly, ramjet gunships are really piss poor in combat against any type of defense; however, I believe the weakness is made up for the strong ship to ship combat ability.

Therefore I suggest a buff for ramjets specifically against HEL cannons. My idea of a buff would be called Hull Ionization for Ramjets. First, Ramjets can only travel in the nebula and use the nebula as fuel. This means Ramjets can create mass amounts of energy. For example, using that energy to create a plasma shield around the hull. Therefore a ramjet could mass large amounts of energy to create a near impenetrable shield. Unfortunately, I doubt realistically 1 ramjet could produce enough plasma to nullify a HEL cannon shot. This is assuming a single HEL cannon's shot is equivalent to a single atom bomb. In conclusion, the more ramjets a fleet has the less damage it receives only from cannons. However I believe this should only work if the ramjets are grouped together, so it convinces players to mass a large enough fleet before attacking HEL cannons.

After some thorough tests, the post above was invalid and therefore the suggestion was flawed. However, it is still a fact that ramjet gunships are piss poor against any type of defense.
Top

Entry #2
During today's play through, I noticed that the production tab showed a false output. Apparently the game doesn't auto-update the production tab for Jumpship Factories, but this may also be applied to other planet designations. I infer the reason behind the false output is because I didn't import enough jumpship auto fac parts.

Shortages don't impact that view and not entirely the production tab either.
Top

While playing today, I was in a fairly 1 sided war against a stronger player. The enemy player named, Celestia invaded most of my clear space planets and a few of my nebular planets including 2 of my ramjet yards. Fortunately, I was able to reclaim a majority of my nebular planets with my larger ramjet fleet. At the end, Celestia and I reached an agreement. Celestia told me that he invaded me, because he wanted to know what would happen to me if I lost my capital and I had no sector capitals. The good news is that I had a sector capital during all of this, otherwise the outcome would've been quite disastrous.

I posted a bug today at http://forums.kronosaur.com/viewforum.php?f=48 in the Bugs thread.
Top

Conquest and Conquest and then Trade Routes without Hub? It is truly a pain to set up trade routes without a trade hub. The average planet of my empire needs 5-15 trade routes and all that clicking can take up to an hour, if I simultaneously did 10 or more planets. This often leaves me slacking off and get bored with management. What I want from this experience is the option for a player to let the computer automatically set up trade ports with the push of a button.

5-15 seems like a unreasonably large number. Consumer goods worlds only need one incoming trade route for trillum, and the most routes any planet could ever need is 7 (food, tech, ship parts, trillum, hexacarbide, chronimium/aetherium+ctholon). With the exception of high tech jumpship yards, no producer has the capacity to consume more than one planet's worth of any resource. For some of your shipyards I counted as many as 5 worlds importing hexacarbide to it, which is completely unnecessary. Streamlining your imports can do a lot to cut down on the trade routes clutter.
Top

gc2 wrote:5-15 seems like a unreasonably large number. Consumer goods worlds only need one incoming trade route for trillum, and the most routes any planet could ever need is 7 (food, tech, ship parts, trillum, hexacarbide, chronimium/aetherium+ctholon). With the exception of high tech jumpship yards, no producer has the capacity to consume more than one planet's worth of any resource. For some of your shipyards I counted as many as 5 worlds importing hexacarbide to it, which is completely unnecessary. Streamlining your imports can do a lot to cut down on the trade routes clutter.

Your right, but in my opinion, more means better. This often leads to something like this: Spider Web Empire 2.0 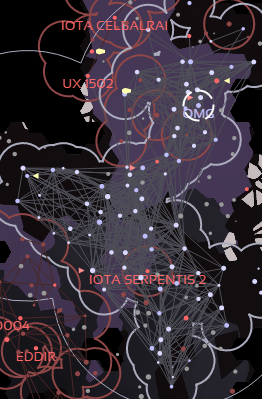 Looks like you have the thickest spider web in the galaxy

It takes an hour to click 15 times? Anyway, trade in old Anacreon was better. No fleet trade routes is madness. Capture radiuses are proof that the devil is real.
Top

CaleyM wrote:It takes an hour to click 15 times? Anyway, trade in old Anacreon was better. No fleet trade routes is madness. Capture radiuses are proof that the devil is real.

Pure exaggeration to express the annoyance of setting up trade lines.

My empire is getting awfully big and disorganized -.-. That is it really for today.
Top

I am the 'Slightly Larger Neighbor' that destroyed your empire #2. Sorry about that but balancing my trade routes takes a lot of time while I cannot really set up defenses for all of my planets. So in order to deter future attacks I retaliated a bit more than strictly necessary.

I might have been only 'Slightly Larger' but I had enough Eldritch jumpships to send ~100000 of them to each of your capitals, while your own total fleet was, I believe, not much larger than 10000 of any kind of ship. I did not have to conquer all of your planets because they defect or become independent when your capitals fall.

I guess you were not aware of the uneven match because you relied on the 'Imperial might' indicator. But that gives you only population number in relation to your own, not of fleet size.

If you attack empire with 'Imperial might' < 50 I believe you will experience increased unrest. But this also applies to neighbors with imperial might > 200, who attack you.

Therefore it is a good strategy not to expand as quickly as possible but to stay small and produce fleets with high efficiency for some weeks, before you pick a fight. This way your larger neighbors cannot easily attack you before you have any significant defense.

I believe there is no unrest penalty for retaliation within a certain time after an attack.

Now in order to have a better estimate of the true power of your enemies, you can get an tally of their approximate fleet size similar to that of your own in your empire tab. I am not 100% sure what the requirements are for that, but if I scout an empire completely and keep an fleet of ~1000 explorers in orbit of an enemy capital for a few watches, their empire tab is filled with the number of ships. See the attached image.

Also you should consider stationing ships in your capitals for the time you are not actively playing. 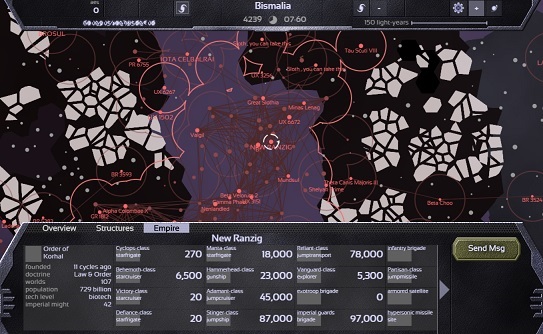 Recently, I have been reflecting of my progress. In comparison, my old empire was larger than my current empire by roughly 30 planets. In addition, I used plenty of trading hubs back then and it was far easier to organize. On the other hand, my current empire is smaller, but much stronger by a rough estimate of 200% in naval superiority. Furthermore, I have abandoned the common practice of trading hubs and instead used a large chain of trade routes. All in all, I believe I am doing well this game, but i infer I am about to meet a beast of an empire.
Top
Post Reply
16 posts