MDFification wrote: EDIT: Wow, really, Trask? I ask if you want to gift me a world you're not using, assure you I won't take it if you say no, so you destroy my empire? Not even an attempt to talk to me, nope, just wipe me off the board with one cheeky bumrush to my capital while my fleets are out pacifying rebellions. That's a weeks worth of play down the tubes, for the third week running. I'll take comfort in knowing that someone's going to pay you back one day, seeing as you have no neighbours who aren't threatened by you left.

I claim Trask's south-western cluster in the bottom corner of the map. Anything else is up for grabs.
Top

My scientists have recreated a human terminal.. .. ..
From the subatomic particle world that has long held me at bay.. .. .. Greetings.

Hear my voice in your mind. As your engines have streaked across the wastes between stars, as your boots have marched across worlds, empires have come and gone, but The Bug King lives on.

it works!
IN GEORGE WE TRUST
Top

The Bug King to the Emperor of the Hand

The populous is curious where those pretty bar charts went to. There absents has our young ones up in arms. Have you ever seen a pupa seething in anger because of no colorful bar charts?...They don't even have eyes yet

Anyways, the populous would be much gratified and pacified if you would be so obliged as to do this for us. Also, my war room, cough* cough* sorry I meant "coffee lounge comrades" are curious about the collective efforts of the galaxy.

Does anyone know when an update might occur? Are ghost empires still a problem in beta 2?
Top

WorldsStrongestNerd wrote:Does anyone know when an update might occur? Are ghost empires still a problem in beta 2?

There were ghost empires in beta II, yes.

The next update won't be for a long while, I think. George is working on Part II for the next few months. However, we've gotten specifications on how to install and run an Anacreon server, so maybe we could see some modders take on some work in that department (or at least maybe different scenarios)
Project Renegade (Beta) : "The Poor Man's Corporate Command!"
Real programmers count from 0. And sometimes I do, too.
Top

Watch TV, Do Nothing wrote: A dramatic blitzkreig in the galactic south ended the total annihilation of IMPERIUM. IMPERIUM launched a surprise attack against Seekers of Knowledge. The two combatants seemed evenly matched before the war; in addition to the element of surprise, IMPERIUM had a much better jumpfleet, while Seekers had more strongly fortified capitals and hubs. The war seemed to go well for Imperium at first- I've heard claims that a treaty was even being arranged to Imperium's benefit- until UFW decided to attack the depleted IMPERIUM, routing them entirely and either encouraging an abdication or taking all sector capitals, destryoing them. Imperium's old territory is now partitioned between UFW and Seekers, with Seekers expanding into the nebula and UFW establishing a new cluster in clear space.

And the Imperium always pays its debts.

You should try a different strategy, that one doesn't really work well with your life and the game. But I am curious as to why you abdicated....? Is it not more difficult to start over than to endure? Or perhaps did you "rage quit?"

Best of luck to your next endeavor. 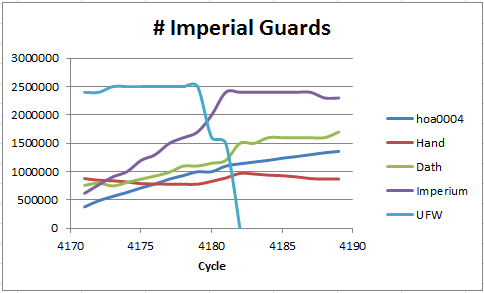 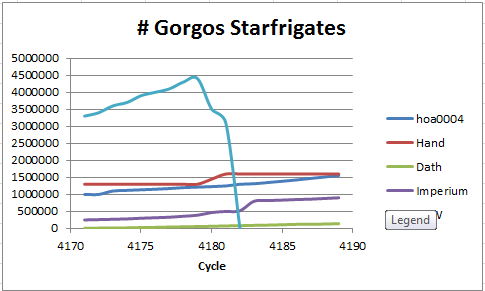 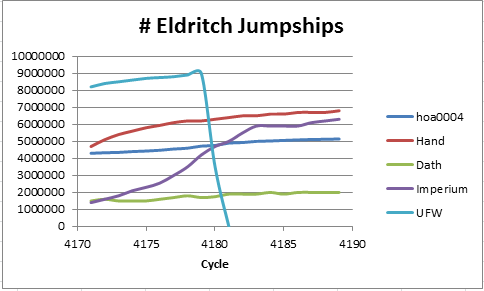 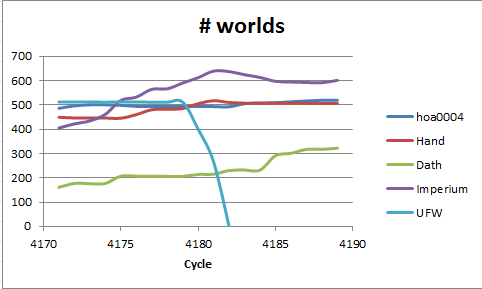 After the great crusades against our now vanquished enemies, the Imperium's legions have returned to their camps to publish an analysis of the great powers' forces and relative strengths in the galaxy. This information is correct as of cycle 4193 and serves as a general overview to see how each empire has chosen to invest its industry.

Hand is once again the most powerful empire in the galaxy following the defeat of the Union of Free Worlds in the Southern Crusade, with the largest jumpfleet and starfleet combined with substantial nebular forces. This is not an empire to be trifled with, and will likely endure for hundreds of cycles to come. The name of their capital is most apt - the Sole Survivor of wars and conflicts past, impossible to be defeated except perhaps through an alliance of other great powers...

The Great HOA0004, whose empire name still remains a mystery, is the next most powerful entity. In possession of a powerful starfleet rivalling Hand's, although its jumpfleet is only outmatched by the glorious Imperium, this sovereign also is set to endure. With an alliance with the neighbouring Dath, its dominion over the West is absolute.

Next, the glorious Imperium. Born in conflict and rising up twice more after defeat, at long last we have restored our honor by repaying every empire ever to cross us in kind, exacting terrible vindication and purifying their worlds with holy fire. Let the memorial worlds to NEWBIE, Trask and UFW be testament to our fury. We are now the single largest entity in the galaxy, although our starfleet is sub-par we will restore it to its former glory. Ad victoriam!

Last but not least, Dath is undergoing a period of rapid industrialization and militarization. Capturing over 100 worlds in the last few cycles, the former Bug King is truly a force to be reckoned with. They have not been tested in battle, but no doubt this new and frightening incarnation of the ancient galactic superpower known as buggzzzz is no entity to cross lightly...
Top

Oh man this is just fan-freakin-tastic. You guys really know how to out do yourselves. Good job, really. What would be really awesome is a live feed stat window of all the empires in the game, sort of Age of Empires-esque. Much appreciated though. Again, great job.

Update/breaking news: Dath launched a surprise attack on Hand. Imperium attacks Dath in defense of its ally but withdraws as a neutral observer after an ceasefire agreement is made. Dath attacked Imperium but damage was negligible. Hand appears to be inactive and could potentially lose the war.
Top
Post Reply
266 posts