Yes, I really should not say just howitzer. What I want to say is that it will be always two weapons that functions basically same. One with slow but high WMD (launchers or howitzer) and one with cleaning screen (like ion blasters). Of course missiles CAN clean mobs but such playstyle relies too mu...

Re: some question of a NewBie

Mods collection only show mods that downloaded from Multiverse site. Mods that you downloaded doesn't show there, instead should appear in the Adventure Selection (See the checkbox list). 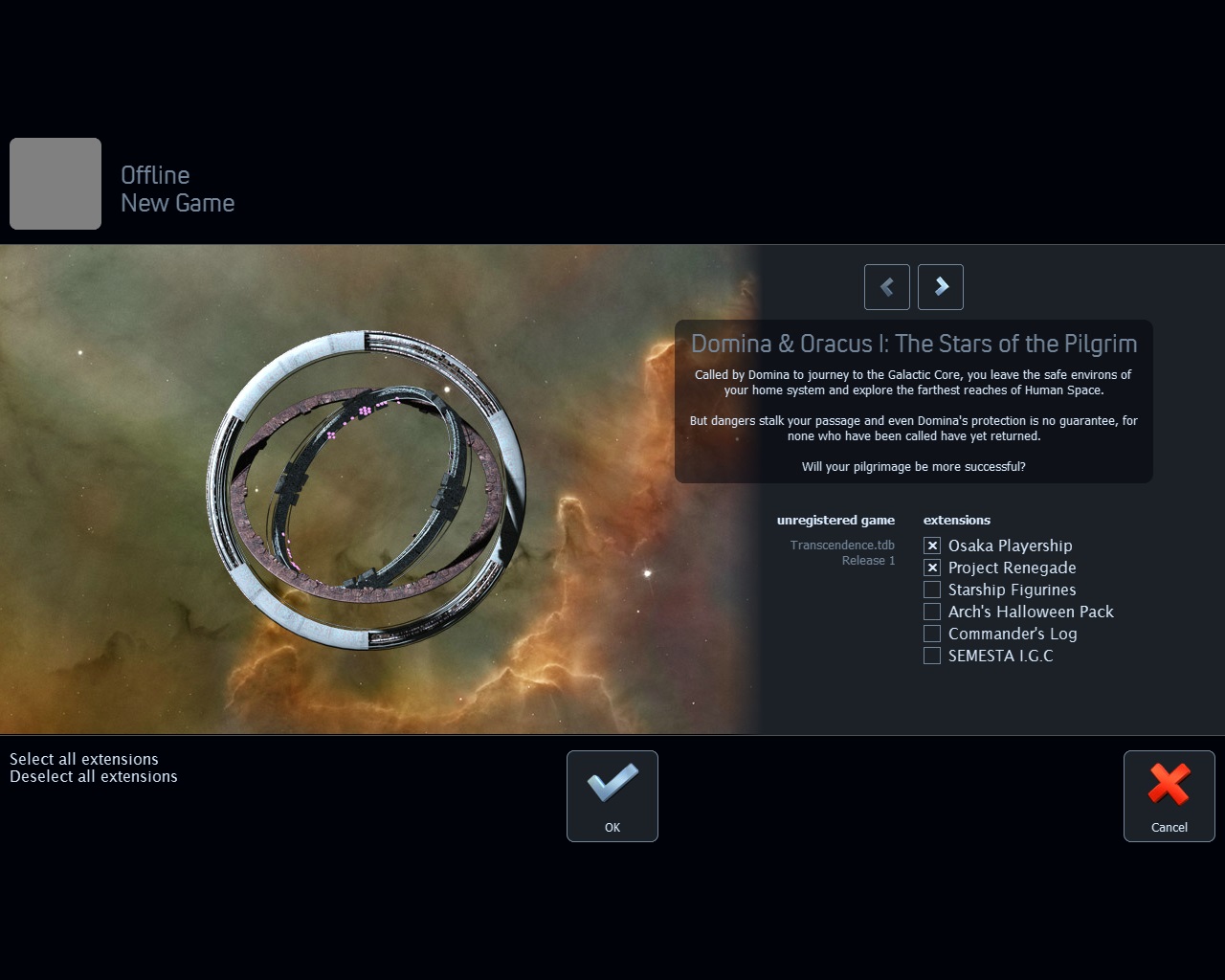 If it doesn't appear, make sure you place it in "Extensions" folder.

Alternatively, if you want some modifier on the ship, I could suggest the game should have shipyard being able to enhance ship's hull.

Not really. My playstyle were not rely on weapon damage, but more on reliable and flexible weapon. In the end game, I prefer on single mount weapon such as Ion blasters or Lamplighter. I also prefer launcher over howitzer. Sometimes I used other weapon, but just for some test or challenge. Two slots...

Updated to version 2.01. Mostly bringing back CM blaster, which renamed to KxK blaster. There also Tambang cannon to mine asteroid. It is blasting-type weapon. So it's effective to volcanic and primordial asteroid, but useless to metallic asteroid. Here the changelog: - Rewrite Changelog and Readme....

On second thought, I should remove ammo configuration because it's obviously ridiculous one ammo could shoot five-spread weapon. Semesta Launcher is exception though; they uses missile packs which is heavy.

For the next update, mostly composed of Kuasa Kritikal blaster series. However, there is one particularly new is Tambang cannon. Since the game doesn't have mining blasting-type weapon, so I created one. Instead making basic blasting weapon, I made five-spread blasting ammo weapon. It might relative...

I'm gladly to announce SEMESTA REBOOT 2.0 has been released! This mods contain most of content from here . The mods contain Semesta Launcher which was planned to be written in drawing board (along with Serbaguna Launcher), but my phone got wrecked and the data completely lost. Nevertheless, it's ava...

There is a Gap on Gladiator Arena.

As shown in the picture. I don't know if there is a gap in the left side of the gate.

My phones were broken and now everything that I have planned on this mods were vanished. Amazing.... (-_-)

However, there is a good news. I'm back home and now currently making this mods.

Sometimes notForSale items are very worthless because when player sells them on regular station, their prices dropped down to 90% from their actual prices. It hurts especially the item is rare, very rare, or not random. Perhaps there are station that dealing on notForSale items via auction. Player c...

Re: A way to track where you have been on your map

Usually that's the case for more experienced players but sometimes, it can be super tedious. I tried Part 2 and finding stargates were extremely time consuming, especially when I'm trying to breeze through to the last system due to Tor Quan ships being OP. I gave up cause I circled around a single ...
Search found 428 matches

Powered by phpBB™ • Design by PlanetStyles