Ringers might have reverse engineered it - it seems like the kind of thing Teratons would do (especially since gameplay-wise they can make Iocrym weapons). Ares could have then found, bought or looted it.
I'm here to shift paradigms and chew bubblegum... and I'm all out of bubblegum.

I just got my old FalconCV mod working in Transcendence 1.3 (not completely updated, but it works with APIversion="14" and a few other changes.

Now, I had been talking to someone on IRC about my ship model I'm working on (to replace the graphics, so I don't end up in conflict with Disney), and he was saying I was going to end up with a ship that wobbled during turning. I never had a problem with the FalconCV doing that under 1.0 but looking at how it works in-game now, I need to find out something from you.

An example of my current ship model (below, and probably not what the finished product would look like) shows where the rotation should be, thus, if rendered correctly, when facing toward the top of the screen, the wedge would be further toward the top of the sprite sheet frame, when facing left, it would be further toward the left of the frame, but the center of the Y axis should not visibly move in the game. Is this even possible now, or does the current engine force all ships to rotate around the visible center (I had a similar problem getting the custom nozzle to rotate correctly with the ship before, as it seems that the rotation code does not use the center of the sprite sheet frame for reference, thus you cannot adjust it's position per frame, by moving it a pixel in some direction, or, at least, at the time, that was an issue). If the center of the sprite sheet frame is not what is used to tell the game what the center of rotation is for the image, then we have no control over how a ship rotates in the game, other than placing phantom pixels at guessed points in the frames, and hoping the engine displays the image correctly. (I am considering some very asymmetrical ship designs in the future, if it's possible and I have the time and gain enough knowledge from this project to do so.)

Is there some code we need to use to re-define the center of rotation for the ship images?

"... the hornet battlepod is the closest we have ingame to flying into battle in a wheelbarrow
with a bathtub nailed upside down to the top of it to provide armor." - The Shrike
Top

Benedict missions sometimes still do not work. After selling an item Benedict told me to sell, I returned to have him tell me to sell the same item again. I cannot resell the item since it is gone. This has happened to me on multiple plays.
Top

As well, with Benedict, sometimes he will tell me to sell something that the ship was created with, such as one my missiles. He generally properly detects that the item was sold, but when you're just starting out, being asked to kill station after station of pirates, and he asks you to sell one of your (at that moment) precious missiles, it gets annoying.
Top

With Benedict, if I choose the last option in the list of info about Domina first, the first two options get skipped and I'm forced into the Benedict tutorial arc. The first two information about Domina options are unavailable.

Having issues with random pausing. No ships on screen but a couple in radar range.
"Have you guys ever watched the show?" ~ Guy
Top

I have found a bug in V1.3 and I am not sure it is worthy of it`s own thread, so I`ll post it here I think. Please tell me if it should have it`s own thread.

The issue is that the list of items sold on a station won`t scroll up to the last two items sold. The items selected are just below the 4-item field and can be selected, but the description can`t be seen.

I have attached a series of 3 screenshots, i only press the down arrow between taking the pics.

This release definitely includes something I have been waiting for: Large screen or high resolution support. Thanks!

The new soundtrack definitely adds a lot to the atmosphere of the game. However Im not quiet sure which music Im listening to when flying past a destroyed enemy station: Is it a track for "exploration" or does the situation count as "combat"?
I personally think the musical score for exploration should be something more relaxing - i.e. something that does not alert the player or even is "interested" to create a nice contrast to combat situations or "enemy approaching".
However whether I like the music or not what is definitely true: The music fits the game and thats whats important.

A tutorial for new players is a really nice idea. I remember my first game of Transcendence where I hardly knew what to do (besides "when in doubt press space" or "shoot the red stuff").
I think Benedict should point the player towards Raisu station, not just check whether the player discovered it. If I didnt know about the part of the story involving Arco Vaughn I probably wouldnt bother docking the station.

A minor issue: The new particle system an effects are nice. However I think the engine exhaust particles should be emitted from the exhaust flame, not the ship. To me it looks like their are emitted too close to the ship.

EDIT:
Also found a minor bug: If the player presses 'left arrow', 'right arrow' or 'space' keys the player ship continues to turn left/right or shoot when the player activates the galactic map.
Ie: EDIT:
After playing some time I noticed the background music stopped after entering a new system. After saving my game and returning to the intro screen I noticed the game was cycling through the mp3 tracks but for some reason would not play them.
I also did notice the game becoming somewhat laggy when this happened which was probably caused by high activity on my USB flash drives the game resides on.
Exiting the game and reloading the save file resolved the issue.
Top

hey i was wondering if you were going to have a donate button for those who want to donate to help with the up coming features if it help or speeds it up? i would love to donate to you but i can't find out how.
~Jake Joachim
Top

Another minor one: I found a binary system where the map grids for each star overlap: 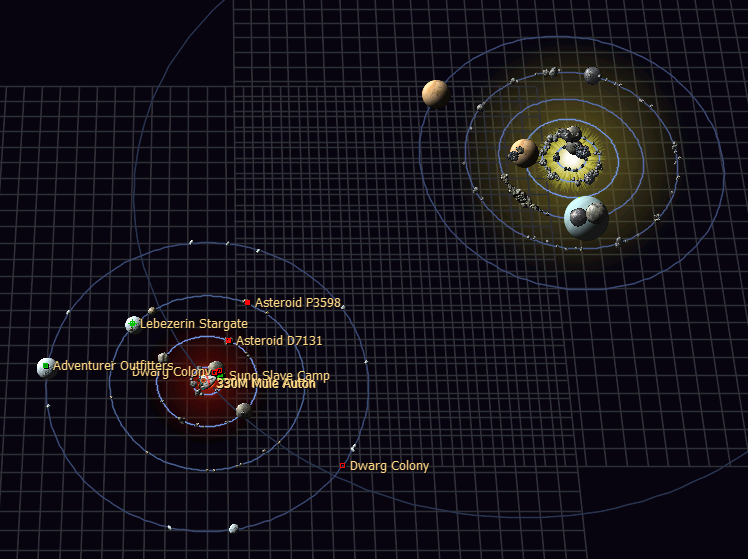 Did not yet encounter ternary or quaternary systems.
Top

CFG wrote:Another minor one: I found a binary system where the map grids for each star overlap:
map grid overlapping.png
Did not yet encounter ternary or quaternary systems.

Should the Mark V howitzer (tagged Makayev) be influenced by the Makayev enhancer? If so this is either not the case or not displayed correctly - I dont see the weapon being enhanced by the device.
Top