New releases and announcements from George and the staff.
Post Reply
24 posts

1.7 Alpha 2 is ready for testing! I'm excited about this release: mouse controls, galactic map overhaul, and other features improve the game significantly. I'm eager to get feedback to refine these features.

Of course, I've had to re-work large areas of the code, so the potential for bugs is equally great. Please feel free to report issues and problems at the usual place.

Thanks to everyone for all their help!
Top

A few things I noticed in the first minute or so, relating to mouse control:

Installed items menu (B) should interact with mouse in order to match other menus. Switching back and forth feels awkward.

(U)se menu should interact with mouse as well, if it doesn't already.

Aside from that, the mouse control feels pretty good.
Permadeaths: Vanilla, CC (No Domina Powers), EP

I've run into a very odd bug a few times where every friendly in the system decides the player needs to die. Trying to reproduce this right now.
Project Renegade (Beta) : "The Poor Man's Corporate Command!"
Real programmers count from 0. And sometimes I do, too.
Top

Some bugs:
I noticed that (typGetProperty aWeaponType "speed") always returns 100 instead of the type's missileSpeed. I think I might have tried a missile type instead of aWeaponType, and it returned 100 too. (Missile had missileSpeed of 50 defined.)

Less serious: Commonwealth residentials tend to overlap each other in St.K's, now that they are bigger. St. K's station placement needs an update to account for bigger stations.

Mouse
I sometimes find mouse annoying. When I load a game, my ship always rotates to where the mouse is pointing. It would be nice if mouse pointer did not appear until used.

Also, the pointer looks like a stubby line.
Download and Play in 1.9 beta 1...
Drake Technologies (Alpha): More hardware for combat in parts 1 and 2!
Star Castle Arcade: Play a classic arcade game adventure, with or without more features (like powerups)!
Playership Drones: Buy or restore exotic ships to command!

Charge-up weapons are easily possible now that capacitor can be set.
Download and Play in 1.9 beta 1...
Drake Technologies (Alpha): More hardware for combat in parts 1 and 2!
Star Castle Arcade: Play a classic arcade game adventure, with or without more features (like powerups)!
Playership Drones: Buy or restore exotic ships to command!

I would like to be able to customize my mouse controls so that I can bind only weapon commands to the keyboard and only movement commands to the mouse. The current configuration sometimes confuses me
-Command Screen Library: RTS in a dockscreen
-Extended Justice: A safer Commonwealth for all
-Playership Bones: Revisit your old ship wrecks!
-Please help out our official Documentarist (me) by editing the wiki
Top

I was hoping the new effects would get a better look at: I totally think they are over kill and some explosions way over powered ( the Xenophobe Ark explosion wiped out half it's forces and would have killed a stock playership ( but I wasn't flying one ) - but what do I know ....

I am sure Midst of Dragons will play in this new update - so if anyone would like to nerf the new effects back to more the older style, Midst of dragons can take care of that until there is a better conversation about them.

regardless of the tireless hours spent to do the new effects....I think they are ahead of their time.
maybe if the ships were bigger...but they can dwarf & over-power the the ships right now 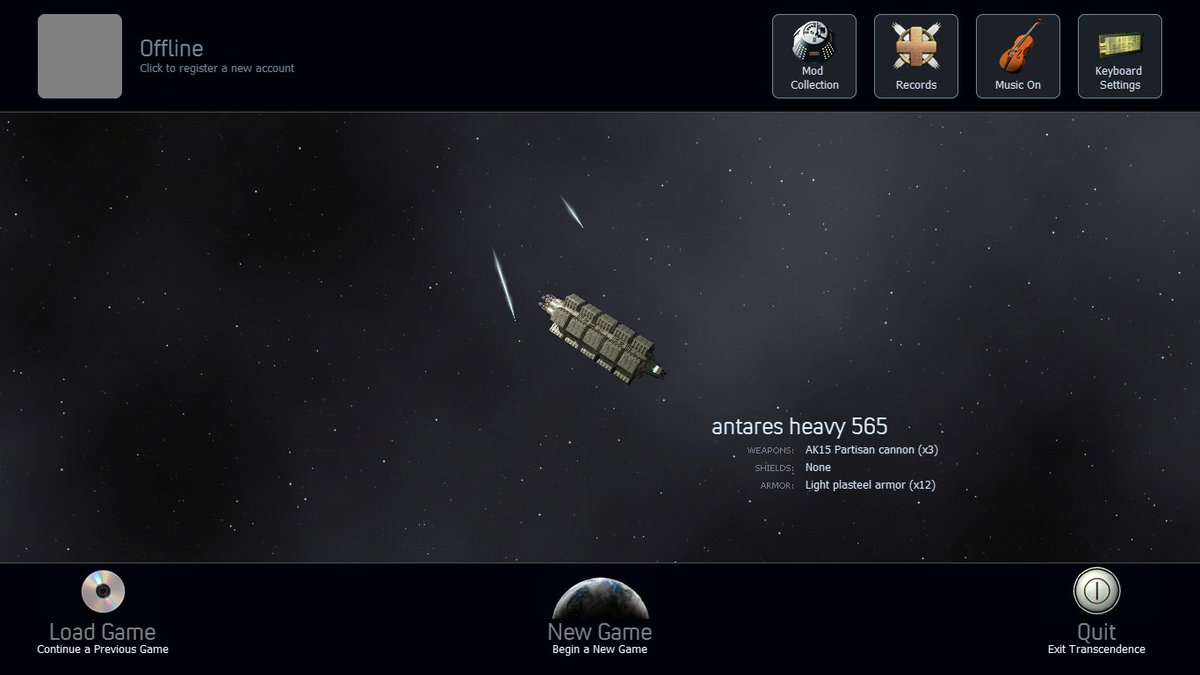 PM wrote:Charge-up weapons are easily possible now that capacitor can be set.

Can't we turn the mouse control off? I'm sorta used to the keyboard only interface.
Top

Harmless bug, but kind of fun:

Pause the game and use the mouse controls - you can turn the thrust effects on/off while paused.
Project Renegade (Beta) : "The Poor Man's Corporate Command!"
Real programmers count from 0. And sometimes I do, too.
Top

Somewhat of a major inconvenience: you can thrust continuously using right mouse button, but you can't do the same using keyboard. It will only thrust when ship has stopped rotating and don't you even dare rotating it more.

Centauri Command Ship appears in the menu. It is deprecated, isn't it?

Mouse controls are breaking balance since you can easily aim using them thanks to that cursor. It removes a huge chunk of difficulty as you had to visually line up your ship direction and enemy ship to find out if you going to hit or not. I suggest adding a fire-line [a dotted line coming out of ship's fire location] for keyboard control so you don't have to strain your eyes and your reactor anymore and to counterbalance mouse controls. I don't think mouse should become the main mean of controlling your ship.
Top

That would be pure distraction
Top

TheLoneWolf wrote:That would be pure distraction

I'd have to agree there. We've already got the targeting arrow, after all.
Permadeaths: Vanilla, CC (No Domina Powers), EP

Tried mouse control a bit, and it makes aiming a bit easier, but it is awkward to control. I will probably stick to keyboard.

Mouse needs to start disabled (i.e., no pointer on the screen) until used. I am getting tired of my ship automatically rotating toward south every time I load a game.

Also, with mouse aiming, 120 facings for aiming is really obvious. I sometimes find blind spots where your ship cannot aim where the mouse points due to 120 facings. If mouse support is assumed to be default, ships should have 360 facings (or more if floats will be supported) for aiming. That probably means decoupling facings from number of frames. (Decoupling facings from number of frames would help support older ships with 40 facings or less.)
Download and Play in 1.9 beta 1...
Drake Technologies (Alpha): More hardware for combat in parts 1 and 2!
Star Castle Arcade: Play a classic arcade game adventure, with or without more features (like powerups)!
Playership Drones: Buy or restore exotic ships to command!