A discussion of all things Transcendence
https://forums.kronosaur.com/

by george moromisato
I've just uploaded the first alpha release of the 1.9 stream:

by Wolfy
Thanks george!

by relanat
I saw the new Ares shipyard image in the git version. Looks awesome. I don't know how you do it!
And, for info, it looks like EP got an update as well.

by shanejfilomena
I LOVE these new Images and the fact that the game has come so far.....I would not be shocked if we can get a VR version for those that have that fancy computer stuff

No cup holders in my ship ..... still got o hold it in my lap while I dodge hostiles.

Lets see if that red flashy armor thingy has been fixet ^^

by PM
The one new feature I noticed most was EMP. With stacking gone, all of the mod weapons that relied on many, weak hits to stack EMP are worthless. Time to redesign or retire several EMP weapons that I made up.

by Alandra
The new station images are cool. 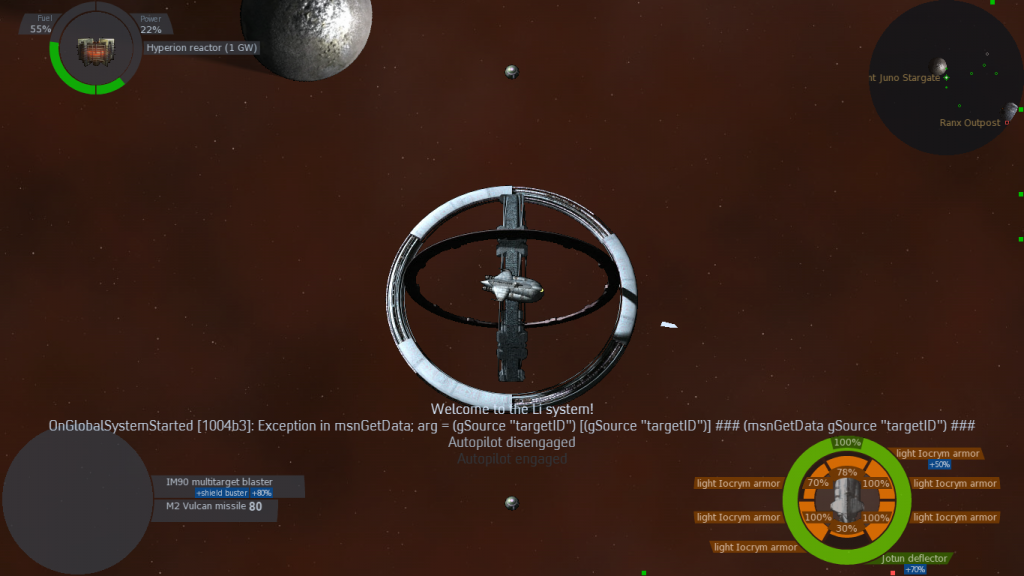 by relanat
Excellent. The new tabs are great. And there is more room in the dockscreens as well. Nice.
Possibly the PgUp/PgDn keys could be left in there. They are handy.

And because neither git nor the forum will let me, can someone let giantcabbage know that the rpgInstallDevicePrep commit might need 'escapeQuotes on the item name if it isn't already in there! I haven't had time to check. Done.

by Amteloletom
I just run the new game a few days ago. New Ares shipyard looks great! Also, the new mission on Ferian Colony also good, I hope George consider more about adding another reward like Plasma Torch or maybe Plasma Cannon in higher mission if possible to make the mission more variation into it. +More variation in Black Market mission also great if George approves that.

+Also it's kinda weird that in Charon system you have Korolov station but without or only one ally station nearby. Maybe adding some allied stations or one that guaranteed could fix that.

It's a Pirate system !
Dock what that Korolev station and talk to the folks to get the stoyline rolling, gl !

by PM
Played a full game (without Corporate Command) almost a week ago. It has been at least a year since I stopped to play a full game. I picked Wolfen as usual. Highlights.

Suggestion: Make the SmartCannon grant targeting while it is installed (after the bug with targeting ROM vs. installed items with targeting gets fixed). That way, player can have a temporary source of targeting before he finds the ROM.
All times are UTC
Page 1 of 1