Just a heads up, but 1.9b4 is out, download at http://kronosaur.com/downloads/TranscendenceNext.zip
Top

I know. It will be a while before I can examine my mods for updating.
Download and Play in 1.9 beta 1...
Drake Technologies (Alpha): More hardware for combat in parts 1 and 2!
Star Castle Arcade: Play a classic arcade game adventure, with or without more features (like powerups)!
Playership Drones: Buy or restore exotic ships to command! 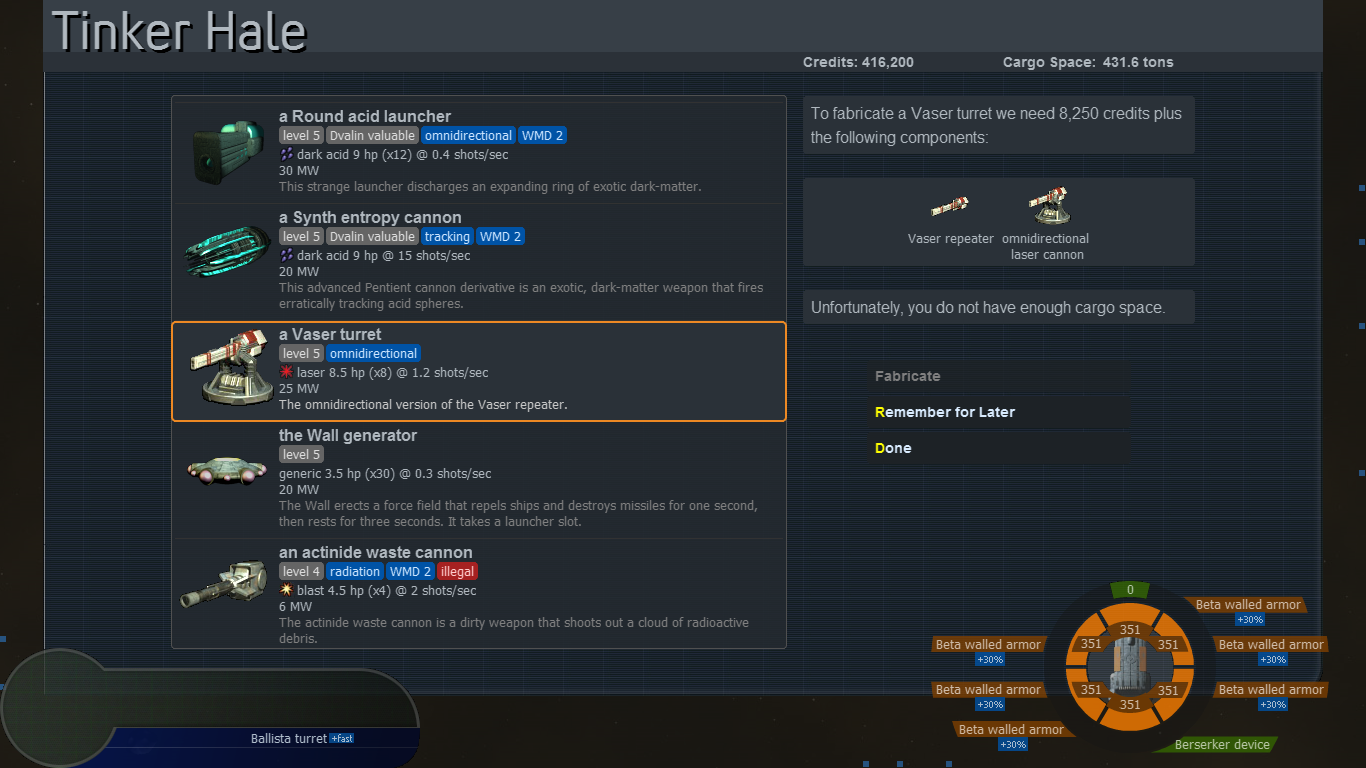 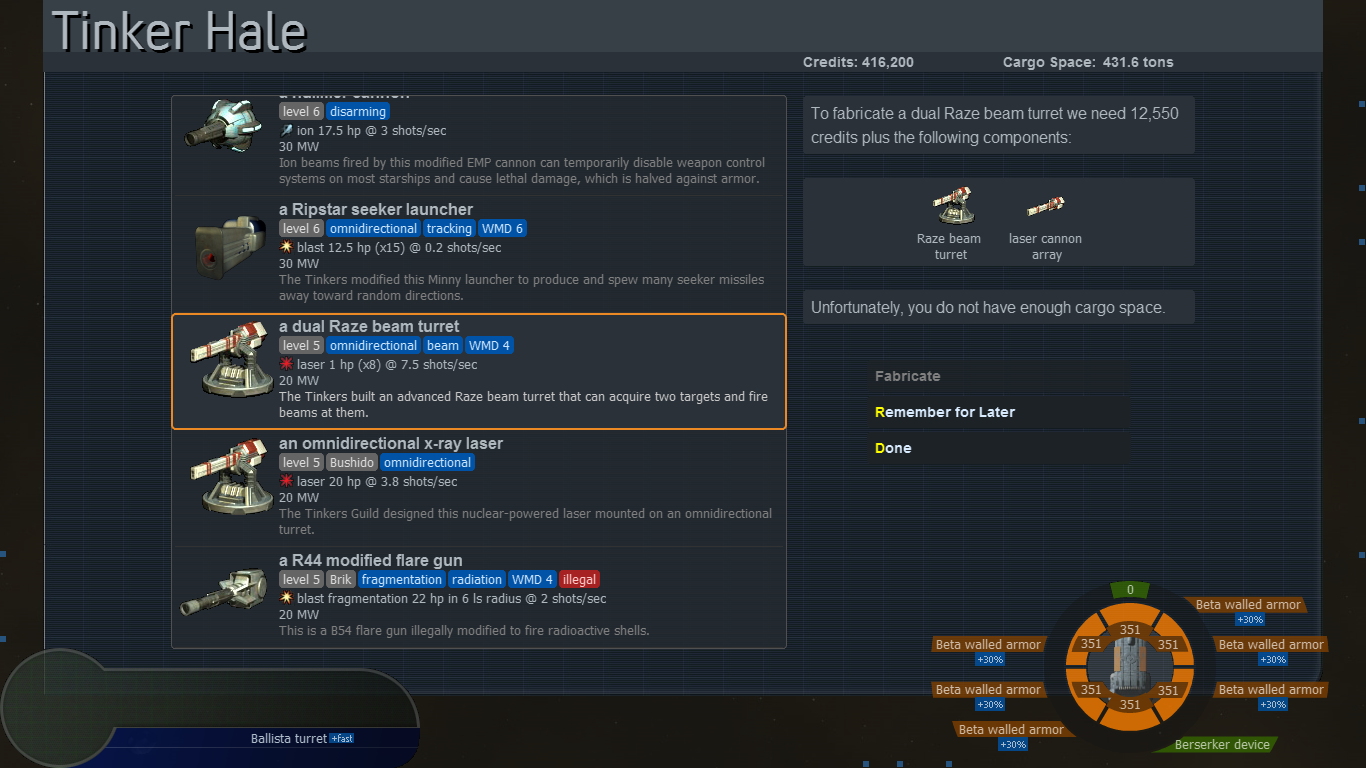 If the components have level scaling, and their current level is higher than their base level, then they are ignored and cannot be used for Tinker or mechanist recipes. I cannot fix that.
Download and Play in 1.9 beta 1...
Drake Technologies (Alpha): More hardware for combat in parts 1 and 2!
Star Castle Arcade: Play a classic arcade game adventure, with or without more features (like powerups)!
Playership Drones: Buy or restore exotic ships to command!

Still here. I have not had time to work on Transcendence stuff lately. I ought to update some of my mods, but I do not know when that will be.
Download and Play in 1.9 beta 1...
Drake Technologies (Alpha): More hardware for combat in parts 1 and 2!
Star Castle Arcade: Play a classic arcade game adventure, with or without more features (like powerups)!
Playership Drones: Buy or restore exotic ships to command!

Good to hear, hope you can find the time soon!
Top

Giving Drake Industries a try in 1.9 and having a blast. Literally, because in third system I got Dual Flare Gun and was able to buy a reactor to use it. Fascinating how it changed over time. When I started using it, it was fast flak gun. Now, after upgrading it and getting tracking device for it, it feels more like heavy torpedo launcher. Especially since I got it to +50% so far, and damage is massive-236 per shot, at 3.3 shots per second. That's still pre-Sanctuary.

So far, the stuff I've tried out seemed great, maybe a touch more powerful than what you can usually get at same level in vanilla.
Top

PM wrote: ↑
Thu Aug 19, 2021 12:47 am
If the components have level scaling, and their current level is higher than their base level, then they are ignored and cannot be used for Tinker or mechanist recipes. I cannot fix that.

Sorry for double post, but I've ran into same issue trying to manufacture Earthdrake launcher, and components definitely weren't leveled as I bought them right before trying it.
Top

Damage shown for cloud weapons look high, but (if I remember right) it shows the total damage it can do if all of the particles hit. It does not show damage the same way fragmentation weapons do, even though radial clouds emulate fragmentation, but with particles instead of conventional bullets.

I am having second thoughts with leveling up items. It makes acquiring higher level stuff too early a bit too easy, messes up balance, and makes the mod's items a bit too strong if acquired too early. For weapons, I will probably limit the upgrade to one level. (Some can be upgraded two more levels.) I probably will change the super-heavy shielded (walled) armor to not level upgrade at all, and set them to levels 3, 6, and 9, because it is far too easy to buy them at low level then upgrade them cheaply, and high hp and regen is too powerful. I would do this to the medium shielded armor too except some of the Drake autons rely on level scaling from the armor.

It will be a while before I look at Drake Technologies and check out the Earthdrake problem, among others. I need to update the mod for 1.9.
Download and Play in 1.9 beta 1...
Drake Technologies (Alpha): More hardware for combat in parts 1 and 2!
Star Castle Arcade: Play a classic arcade game adventure, with or without more features (like powerups)!
Playership Drones: Buy or restore exotic ships to command!

Thought it's ready for 1.9...the difference between beta and full release usually isn't that significant to break something.

Anyway. I didn't have time to try out nearly all new stuff, but what the issue really seems to be is scaling with upgrades, not the upgrades in principle. Firedrake, for example, scales just right. Earthdrake cannon and dual pulse gun tend to get a bit OP early, especially if you get either of them in Eridani. However what I found to be worst offender are the auton cargo bays. They're awesome flyswatters. Too awesome. And the auton recall ability only makes them better. It's far less clunky and safer to use explorers that way.

IMO the auton bays need a bit toning down, and some items perhaps need, if possible, to have their upgrades gated behind progress.
Top

The drone bays were an evolution of my previous creations, from Auton Assembly Hangar (separate mod of mine), Fighter Bays (another mod), and Zapsats (in previous DrakeTech releases). The drone bay is the one item I really need level ups on or else too many "drone bay +x" would dominate shops' inventories.

Earlier releases of DrakeTech had zapsats, which worked much like the Chmmr's in Star Control 2/Ur Quan Masters. The problem was my take on Zapsats was that it was a huge resource hog (not suitable for use by multiple NPC ships at the same time). When recent releases added a new orbit command, I removed the zapsats and replaced them with the drone bays as a way to collapse and merge ideas from my past mods.

The drones are, in theory, weaker than a proper weapon (beam one has less range than the Drake beam weapons the player can use). Still, they are quite strong if the player can keep their level current. They are fun, but their balance is a bit dubious, being a weapon in a non-weapon slot.

The one way I should tone them down is make the drones limited like ammo or charges, and player needs to pay money to recharge the bay, but I probably need to rewrite much of the code and find a way to communicate the count to the player.

One quirk of the drone bays is while in orbit mode, they cannot attack stations. 1.9 added a feature that enables this, and I need to update the mod to take advantage of that.
Download and Play in 1.9 beta 1...
Drake Technologies (Alpha): More hardware for combat in parts 1 and 2!
Star Castle Arcade: Play a classic arcade game adventure, with or without more features (like powerups)!
Playership Drones: Buy or restore exotic ships to command!

I've finished some playtesting, and I have to say that at least Jedi bay is way too OP when leveled. As in, take down average Ares patrol or Iocrym Sentinel within 10 secs without help strength (and yes, Challenge diff). I have not tried other bays yet...

Otherwise...I found that most weapons are quite balanced. They tend to have a bit more versatility compared to vanilla weapons, which is offset usually by their high cost and short range (seems to me that all weapons I've tried had shorter range than similar vanilla weapons). For example, if you look at choices for the late game Minotaur...T200 vs. advanced tritium cannon: T200 has less raw DPS and I think range, but has proximity fuzed area of effect shells and higher WMD which, if I remember the calculation correctly, make it deliver better damage against hull of stations and capital ships. And due to leveling, it's more expensive even if you loot one.
For omni slot, Sparx vs. omni thermo vs. IM90. Sparks got worst raw DPS and range, but has WMD that IM90 doesn't have and accuracy against moving targets that thermo doesn't have. I'd probably take omni thermo if I had enough tritium injectors available to +150% that along with T200, but I looted quite a few ion capacitors instead.

Other weapons that I've tried were mostly made superior by their leveling. If you could make it so dual pulse gun, Earthdrake and Firedrake can get their first upgrade only at RA and beyond and second at St.K and beyond, they'd be much better balanced. Similar for dual flare gun which should get its upgrade only from Sanctuary onward.
Top

Weapons with less range tend to have other properties to offset that drawback, like more damage. The T200 is on the high-end, being expensive and somewhat power-hungry.

I put WMD on the beams because I almost never use non-omni energy weapons as common threats evolve from fast gunships to capital ships and stations.

For the lightsaber items, I might lower the max level down from 10 to maybe level 9. Even with slightly less range than my other beam weapons, it seemed a bit too strong. That too is another weapon meant to level as high as it can go, but perhaps going all the way to 10 is a bit too much.

Thanks for playing all the way to the end.
Download and Play in 1.9 beta 1...
Drake Technologies (Alpha): More hardware for combat in parts 1 and 2!
Star Castle Arcade: Play a classic arcade game adventure, with or without more features (like powerups)!
Playership Drones: Buy or restore exotic ships to command!

Yeah, I found that when using Minotaur, you can overload even enhanced Hyperion with some loadouts. I've tried a few more "endgame" weapons from an archived save....IMO the plasma weapons are just a gimmick...good at blasting Sentinels and small Ares ships, lack of raw damage or WMD for other targets. Wyrm missiles are the exception, they're absolute killers.

I've noticed a weird issue though. In the late game, some Drake stations were selling weapons enhanced by...armour enhancements. Some seemed to work, at least the listed damage was higher. But what does a launcher enhanced by regenerating nanos mean?
Top
Post Reply
407 posts