"A sense of monstrous guilt was upon the land, and out of the abysses between the stars swept chill currents that made men shiver in dark and lonely places."
-H.P. Lovecraft, "Nyarlathotep"

This mod introduces a new enemy faction, the Hayari Noosphere. The faction specializes in faster-than-light technology and stealth. It also comes with a number of unique usable items and weapons.
Please excuse the 2d graphics made in Battleships Forever - my skill in 3d modelling is just about non-existent, as is my skill at graphic design.

LINK TO MOD ON XELERUS
LINK TO GRAPHICS ON XELERUS
To install this mod, download BOTH of the above files, and extract them both directly into your extensions folder.


INFO
The Hayari Noosphere is a secretive faction that has only recently begun appearing in human space. Very little is known of the exact nature of the Hayari Noosphere, except for the fact that they possess extremely advanced technology beyond even that of the Iocrym. This is seen most often in their ability to travel at faster-than-light speeds without using stargates, as well as their wide adoption of faster-than-light technologies in everything from their ships to weapons and communication systems. In addition, most Hayari vessels are nearly invisible to human detection systems due to their armor which absorbs most electromagnetic radiation originating both from within and without the vessel, including reflected light and the ship's own thermal signatures.

The first encounter between the Hayari and mankind, referred to as the Kobayashi Encounter, occurred in 2346 when the Commonwealth cruiser CFS Kobayashi encountered a Hayari fleet while on patrol in an asteroid belt in the Fomalhaut system. The encounter resulted in the destruction of the Kobayashi and the vast majority of its escort fleet. While this incident quickly faded into obscurity in the passing months, encounters of the enigmatic Hayari vessels were on the rise, and stories of attacks by invisible enemies matching no known ship profile in human space spread on Commonwealth military vessels and settlements in the Outer Realm. While knowledge of existence of the Hayari has become widespread among spacers, the Commonwealth still knows almost nothing about the nature or motives of the Hayari.

It is speculated that the Hayari presence here is nothing but a mere scouting force, as evidenced by the fact that Hayari ships and stations seem to be designed more for quick, crippling strikes than heavy firefights. Hayari vessels have been known to target human ships carrying Hayari technology specifically, but otherwise do not seem to engage privately-owned human vessels without provocation. For reasons unknown, the Hayari do not engage Teraton stations, nor do they attack Xenophobe vessels.

Hayari ships appear to be piloted by human beings in suspended animation. As all attempts to remove the humans from Hayari ships have led to death of the pilots, the motives of the Hayari remain unknown. Due to the design of their ships and the highly advanced nature of their technologies, though, it is widely believed that the humans are simply reprogrammed by an unknown entity, likely of alien origin, to pilot Hayari vessels.


Hayari technology frequently utilizes exotic energy and space-time manipulation concepts as of yet non-replicable using human science. Examples of this include the ability to accelerate positive-mass objects at faster-than-light velocities as seen in the tachyon cannon used by their capital ships, and gravity/temporal control to the extent of allowing wormhole generation and containment of meson particles in such a way that halts their decays until desired. Their ships are thought to use graviton manipulation in order to turn, and use an unknown form of non-reactionless thruster for forward motion. Analysis of Hayari wrecks suggest that this thruster utilises matter ejected via singularity in order to propel the vessel, although the type and origin of this matter is unknown. Hayari reactors rely on the Hawking effect to produce radiation that is captured and transformed into energy. They generate and contain black holes through unknown means, which then are fed enormous amounts of matter stored by means of non-Euclidian space storage capsules. The radiation emitted as the black hole shrinks is used to provide energy to the ship. The matter fed into the black hole prevents it from collapsing, which would disable the reactor until the black hole can be "ignited" again via the high-energy laser emitters surrounding the singularity reaction chamber. Some less powerful Hayari ships, though, utilise antimatter reactors comparable to high-end human antimatter-catalysed fusion reactors like the SN2500 and Koshiba-500, only much more efficient and powerful. These antimatter reactors are compatible with xenotite and pteracnium based fuels. 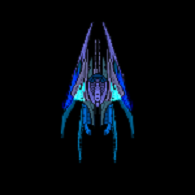 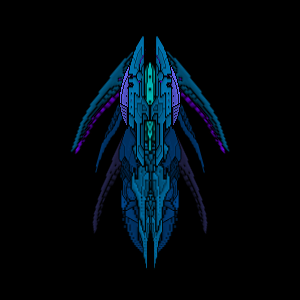 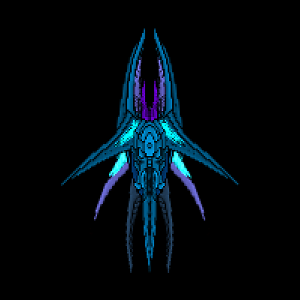 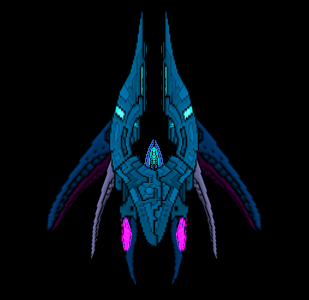 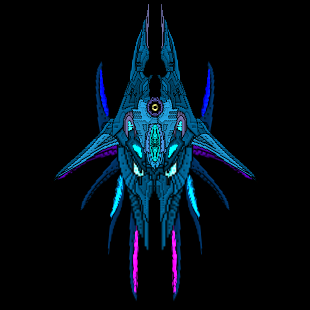 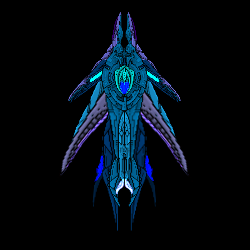 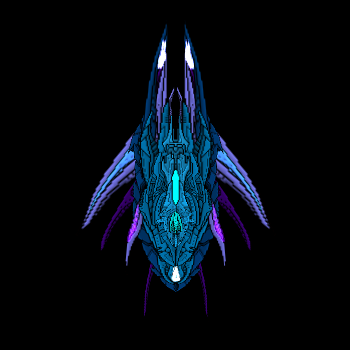 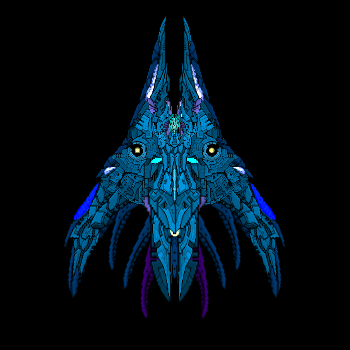 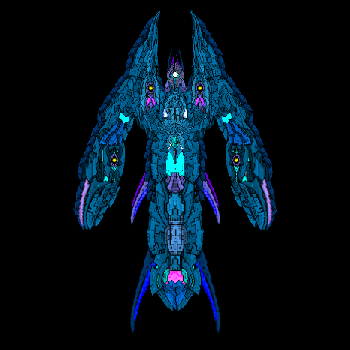 Despite the 2-D, the ships are very good looking! Will look further into the mod later.
Has resurfaced!
Top

Wasn't able to play it without PSD.
The files for PSD compability are looking for ressources which only PSD provides.
Removing the PSD compability files resolves in another error, don't know if this would be solvable by removing the code for loading the PSDc files within the main file.

I played with Cpt. Reynolds T42 playership mod until I had the first Hayari Encounter. Got blown into dust in seconds.. I'll try out more later, you were inspired by some of my favourit games and did a lot of background story, what I strongly appreciate
Top

There are other 2d ships like the Paper Fleet mod but this is amazing :3

Can I use the graphics for a huge megamod project I've been working on? I'll give you credit (of course!) but I just need awesome ship images to populate the universe I've been working on :3
Tutorial List on the Wiki and Installing Mods
Get on Discord for mod help and general chat

Additionally, Hayari battlecruisers armed with torpedoes will, like all other Hayari capital ships, regenerate ammo. Also fixed an error with a debug item (was using it to test a feature, and forgot to remove the testing code after done

There are other 2d ships like the Paper Fleet mod but this is amazing :3

I have no problem with you using these ship graphics, but you will also need to give credit to the Battleships Forever community (since I simply used their ShipMaker and sprites that they produced to produce my graphics). The BSF community does not allow the use of their sprites for commercial purposes, but it's OK if you're not planning on making the megamod a paid one.
"In this world, there exists a balance between those who are creators, and those who are users. [...] I vow to dedicate myself to the side of creation. The labour involved becomes joy when I know there are those who will enjoy my work to the fullest."
-Hermit Gunsmith, Cave Story
Top

I used to put ships together with BSF, too.

Off the tangent @ RPC how many factions have you planned in SG00? (I guess that's the megaproject, no?)
Has resurfaced!
Top

Also, thanks Heliogenesis! I'm not planning on making this a paid mod so yeah

Haha my T42 Gunship was blown to smitherines? Kinda nice to know that its not overly OP! I've yet to test Hayari Noosphere mod tho. sounds like fun!!
"Not just beautiful, though--the stars are like trees in a forest, alive and breathing. And they're watching me." -Haruki Murakami-
Top

By the way.
Gravitic tether dockscreen will apply new settings only if you exited with "Exit button", but not through Esc because of next. I am not really sure whether this action is called when you exit with Esc.

EditorRUS wrote: By the way.
Gravitic tether dockscreen will apply new settings only if you exited with "Exit button", but not through Esc because of next. I am not really sure whether this action is called when you exit with Esc.

When testing on my computer, exiting the dockscreen with escape key applies the settings. Remember that the settings being applied are whatever is being displayed on the canvas to the left of the menu - and pressing escape when entering a range/power value will discard the changes. The test that I performed, and that showed the proper settings being applied, are as follows:
1. 'U'se the Graviton tether generator.
2. Change one of the values (range, momentum or automatic tether threshold) by pressing the respective command, entering a value, then pressing Enter (or accepting the changes).
3. Press Esc.
4. 'U'se the GTG again. The values should be the same as the changed values right before you pressed Esc.

Try that, and see if the problem still occurs.
"In this world, there exists a balance between those who are creators, and those who are users. [...] I vow to dedicate myself to the side of creation. The labour involved becomes joy when I know there are those who will enjoy my work to the fullest."
-Hermit Gunsmith, Cave Story
Top

Attempting to play this mod and Corporate Command in the same game results in constant On Global Update... errors.
Download and Play in 1.9 beta 1...
Drake Technologies (Alpha): More hardware for combat in parts 1 and 2!
Star Castle Arcade: Play a classic arcade game adventure, with or without more features (like powerups)!
Playership Drones: Buy or restore exotic ships to command!

PM wrote:Attempting to play this mod and Corporate Command in the same game results in constant On Global Update... errors.


I do not at present have a copy of Corporate Command, and am not likely to purchase it for some time.
I may be able to fix this error though if you could post a copy of your debug log when these errors occurred.
"In this world, there exists a balance between those who are creators, and those who are users. [...] I vow to dedicate myself to the side of creation. The labour involved becomes joy when I know there are those who will enjoy my work to the fullest."
-Hermit Gunsmith, Cave Story
Top

I narrowed down the cause. It is related to the Stock Market, and it seems to expect sovereigns defined on stations used in the game, including those used other purposes (such as those used by weapons code). I got around the problem by adding a dummy sovereign to all of the stations.

The PSD6+ Xelerus pack has an updated version of your Hayari xml files (plus a few extras) that work for Transcendence 1.3 beta and PSD6+, if you want to take a look.
Download and Play in 1.9 beta 1...
Drake Technologies (Alpha): More hardware for combat in parts 1 and 2!
Star Castle Arcade: Play a classic arcade game adventure, with or without more features (like powerups)!
Playership Drones: Buy or restore exotic ships to command!