It's been a long time, but I'm very pleased to be able to announce the release of SM&M++


This mod alters balance for things that I think are a bit out of whack, improves graphics, adds sounds, and generally tries to improve on vanilla without changing the feel of things. It is compatible with Stars of the Pilgrim Part I (with or without Corporate Command) AND Eternity Port, and can be used in either adventure!

You can download the latest version (Alpha 1.975) from dropbox right here!(Note: Requires Transcendence 1.7 Beta 1 or later. Designed to be run with SNAPSS)

Savegames using versions 1.1 and 1.2 of the mod are not compatible with alpha 1.95

And the original 1.0 version here!


(Sorry, no Xelerus link....xelerus is dying and won't let me upload)

All that sounds pretty good.

What do you mean by "eardeath", though? Should I be worried?
Permadeaths: Vanilla, CC (No Domina Powers), EP

What do you mean by "eardeath", though? Should I be worried?

Not really. Sometimes the sounds clip into each other and sound quite harsh. Turning the volume down makes it less noticeable. I'm trying to find a sound version that doesn't...but right now it's only really a problem if you're sitting right next to a ringer station.

Keep in mind though that being autistic, I process sound differently and thus stuff like that is super-noticeable and grating to me. I don't know if it's as apparent to people who have 'normal' neural-stuff.
Mischievous local moderator. She/Her pronouns.
Top

I hope George considers adding this mod as an official extension, once it is polished and proven. However, I need to first try out 1.6 and try my fingers for a fast and furious run.
Top

Fixed download link to repair a broken .ZIP. Thanks to Ishman for pointing this out.

Patched to 1.1: Some extra tinker recipes, revised lamplighter and Kiloton cannon, removed some unused sound assets. May have a few issues but can hotfix those if they're found by the 2 people who actually use this mod.

Other notable stuff are a fix to the vanilla bug with mining charges. SM&M++ makes these have 100% passthrough, and thus no false negatives. The mining laser has also been buffed.
Mischievous local moderator. She/Her pronouns.
Top

Downloaded now, will try to test at some point. …Fair is only fair, after all. ^.~

Updated OP a little: put the featurelist up to V1.1, added line about what it's compatible with (pretty much everything that's stock/registered, for now).
Mischievous local moderator. She/Her pronouns.
Top

Small thing: KM100 missiles should weigh 20kg like in Vanilla. Right now, they are 50kg and its ridiculous that its heavier than the KM120 missiles.

Good job on the mod, I've used the laser array and its a lot easier to hit with all 3 lasers now.
Top

SolarGalaxy wrote:Small thing: KM100 missiles should weigh 20kg like in Vanilla. Right now, they are 50kg and its ridiculous that its heavier than the KM120 missiles.

Good job on the mod, I've used the laser array and its a lot easier to hit with all 3 lasers now.

Fixed in the next patch. A few of these tweaks from 1.6 slipped past me.
Mischievous local moderator. She/Her pronouns.
Top


This is the first public alpha for SM&M++ 2016 (or 2.0 if you want to be "modern" and "versiony" about it), a major overhaul and rewrite of the mod currently in development. Features are (mostly) included in a readme file in the ZIP archive, or you can check out the development thread. This version requires Transcendence 1.7 Alpha 2 or later and is designed to be run with SNAPSS. For best results, please ensure both mods are installed before starting a new game. Old savefiles from SM&M++ 1.0 and 1.1 games will not work with Alpha 1.9.

Entity conflicts with other overriding mods are entirely possible, and should be less frequent when I tidy up my entities in Alpha 1.95, coming "Soon". However as SM&M++ does make extensive changes to vanilla entities, conflict will occur with other mods that do the same thing. This isn't a bug: it's how the game works. Disable the conflicting mod for your SM&M++ savefiles or edit the mod on your system to get around it.
Mischievous local moderator. She/Her pronouns.
Top

-Aquila patrols now a rare lategame spawn
-Voss und Szell IAV varients added to commonwealth defender tables
-Nerfed and renamed the Voss 1a deflector (now it's the Dobson 1a, but is still manufactured by V&S)

-Added in some items I accidentally left out of 1.9 but had already coded up
-Viking IIa now immune to radiation so the ship it escorts can't irradiate it by accident.
-Lord's Drake now carries decon gel
-Fixed a couple of minor bugs
Mischievous local moderator. She/Her pronouns.
Top

-Reduced interaction on Akan quadmount and Shtorm Repeater
-Fixed some Protector 3 and 4 stuff (KNown issue: Will not fire auto40 plasma rounds because of an engine AI bug)

Savegames using 1.9a are compatible with 1.9b, although you won't see all the changes unless new ships spawn in.

I've replaced the download link, so you can update from the OP.

Edit: Reuploaded with some tweaks that were partly after-the-fact, partly "should have been in but I took the wrong XML"
Mischievous local moderator. She/Her pronouns.
Top 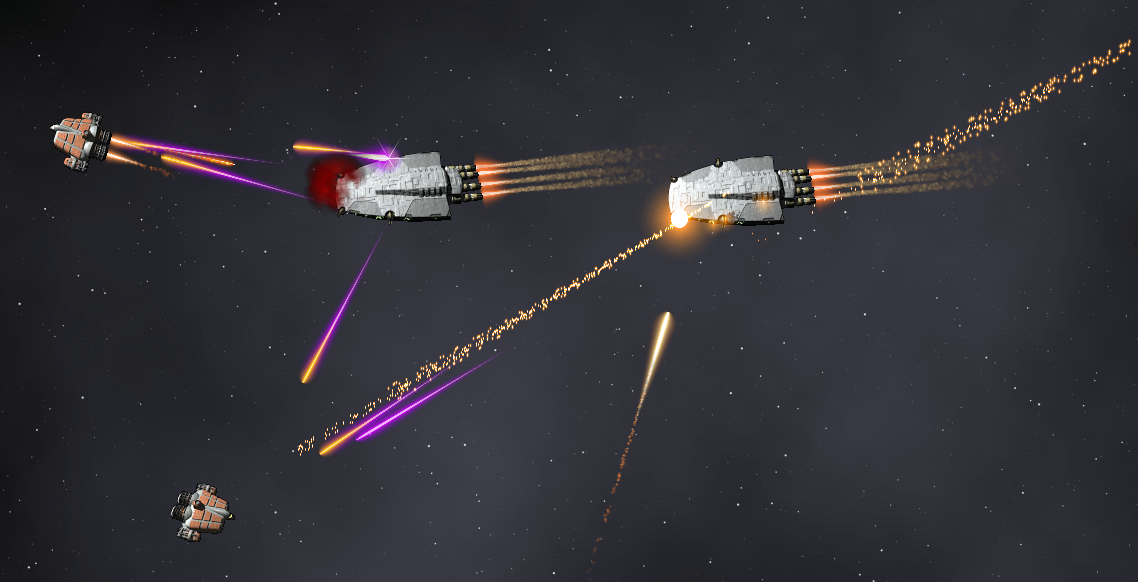 -Kronosaur replaced with the setup it should have: 4 turbolasers and 4 red lasers. This gives it good forward firepower, but a vulnerability at long range. The armor is now also immune to radiation.
NOTE: Due to engine bugs, this ship appears ingame as a frigate. It isn't. It's a Tripoli.

-Added Borer III (removed unused entity and item to fit in, may cause some compatibility issues with savegames using randomisation mods). This ship mounts an advanced, dual heavy or dual advanced mining laser.
-Added reinforcement tables to all outlaw mining stations
-Edited ship tables to remove insane Sotho and Oromo (and HAMMERHEAD) spawns in high-level systems (seriously George)
-Sotho II and Oromo II now turn up. Oromo has midgame gear, Oromo is a later-game enemy. Nothing too insane, but I'm interested in feedback.
-Updated encounter tables and mining tables. Borer IIIs, Sotho II's and Oromo II's now spawn in high-level systems. Note: These are dangerous ships
-Borer II can sometimes have a dual mining laser instead of a heavy mining laser (does not affect existing ships)


This update does not break savegames, however you will only experience the full features in a new game. You will note the new encounters, but not the new guard tables in a reloaded savefile.

-Tsar Launcher rebalanced
-Rasiermesser factory alterations from V1.2 re-added (they were lost during a rewrite early this year and needed to be replaced).
-New gun (Aspis AM-7)
-Lots of little tweaks I can't remember


This is a big little patch, but it should be compatible with savegames. Note that you need a new game to get all the features working properly...but failing that, you'll get some of them at least.
Mischievous local moderator. She/Her pronouns.
Top
Post Reply
33 posts