A place to discuss mods in development and concepts for new mods.
Locked
391 posts

I've just pushed a hotfix. Also includes new code for the outlaw miners. With fixed spawns, there is always a level mismatch...either guards are too easy, or too hard. This (somewhat experimental) move to tables allows for more gradual shifts. I may need to add more Borer variants though...right now the dropoff is a little sharp. Worth noting also: groups of guards spawned with tables will always be of the same shiptype (because the table selects one entry, then spawns X of them, rather than running X times, when you run a "count" on it). This may result in a sharp and sudden surprise.
Mischievous local moderator. She/Her pronouns.
Top

I've started work on a friendly faction. My next public release (probably later today) should have the bare bones of them, plus a Voss und Szell dealer (they sell V&S and other Freeworlds gear). The freeworld at Mikhail's Rest will be a long-term project, but I can get their equipment in very quickly. Right now they have a sovereign (only used by Voss und Szell right now) and a few companies got moved over: Parker Plasmatronics, Voss und Szell, and Archimedes Industrial.

Mikhail's Rest is supposed to be rather a large freeworld system, situated in the early part of the Ungoverned Territories. I'll have to go code-diving to work out how to make it, of course.

I've also added some very weak internals to the EI200, altered some AI settings, and done more balance and bugfixes over the last few days.


The big things left to do is armor and shields. The current freeworlds range isn't big enough to fill store inventories, so they end up stacking lots of the same item. Fortunately, this means I just have to code up everything I'd already had planned.
Mischievous local moderator. She/Her pronouns.
Top

These guys are also from the Mikhail's Rest branch of the Freeworlds. They make the Dobson Projector. In future I'm considering giving them some more weapons, but that'll take a bit of time.

-Voss und Szell have their new VSA line. It's made of steel and is very heavy, but has about double the standard HP for its level. It's now used by the Protector series of IAV.
-Archimedes Industrial have the Hoplite and Phalanx lines of armor. Hoplite is made of aluminium with some ceramic coatings and is very light. It has good resistances but fairly low hitpoint counts and a weakness to particle and blast weaponry. Phalanx is made of aluminium and steel and is a light to medium armor. It's optimised against particle and blast (and ion/thermo at its top-level) but has significant penalties to laser and kinetic (bad against Marauders, AXTIR, and LOTOR). The top varient is designed for a battlecruiser that may, eventually, one day, in the distant future, actually exist in the mod.

-Archimedes Industrial have the A25, A30 and A40 deflectors. They regenerate extremely quickly but have low hitpoint totals and use a lot of energy when regenerating. They're basically early-game Lazarus deflectors that aren't as awful.
-Dobson Defense and Manufacturing has the Dobson 2b deflector. It's....well....It's a Dobson 1a that uses more power, and reflects blast instead of kinetics. Very limited usage, given it's transparent to energy weapons.

Voss und Szell now have shops open throughout human space, selling their own goods as well as those of their partners in Mikhail's Rest. There's an assured-spawn in Rigel which is a little iffy about positioning, but seems to work fine (only on new savegames, of course

They now use some other custom gear, and generally use more V&S armor.

I'm planning some new armors for Dobson, probably focused on regeneration and powered armor......but they're a bit up in the air. So those might sneak in before I round everything up and chuck it up on Dropbox....or they might not. Either way, the next patch is going to be a pretty big one.
Mischievous local moderator. She/Her pronouns.
Top

The loot in the Lords stations is good. It makes you want to go after them.

Thumbs up for the weapon repair kits.

And I like the multi-station layout of the Lords stations as well.

EDIT: these are from the j version.
Bit of a glitch in the Weapon Repair Kit dockscreen.
I repaired an Ion Disruptor (out of the upgraded Barbary... nasty

) with a damaged Convergence Cannon in the hold as well.
It repaired OK but the dockscreen didn't refresh properly. See attached images. Needs a 'scrRefreshScreen' after the dockscreen code, I think.

Also the Makayev Defense Turrets are dead. Even if you spawn them with GODMod. 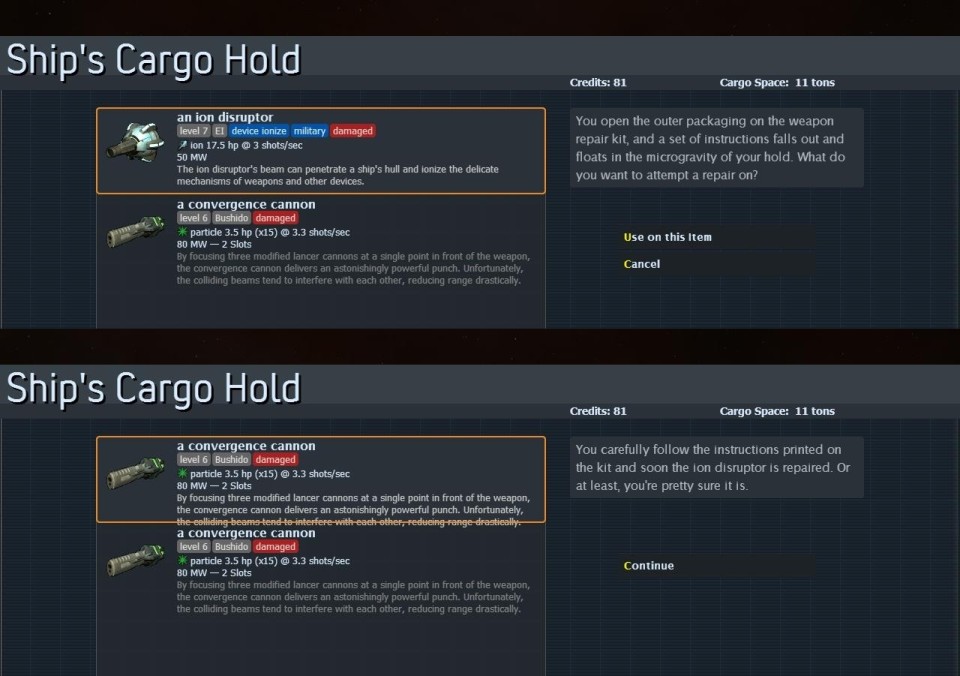 A few changes in the works for Alpha 1.95A (Coming Soon, probably tomorrow):

I am hoping to sneak in some preliminary changes to the Tinkers...but I'll probably need an actual Tlisp coder to write some of it for me.


And a few others:

-EI7000/M now carries fuel, can carry the J400 rocket cartridge (shorter range, slower, more damage)
-Hornet Sentinel replaced with Hoplite-class Battlepod. This is still using the Hornet graphic....for now. It's massively more dangerous though, and fortunately it's only in the game as a station guard right now. Very vulnerable to missiles....if it gets hit.
-Hoplite now appears as a station guard and traffic (the Sentinel was in there already, this will gradually replace it in existing savegames)
-Made the Oromo-II turn up later as random traffic.
-Increased traffic frequency of base Oromo


I've been doing a test run to examine lategame spawns, and while I still think I need more ships....I'm pretty happy with how friendly stations are defending themselves: 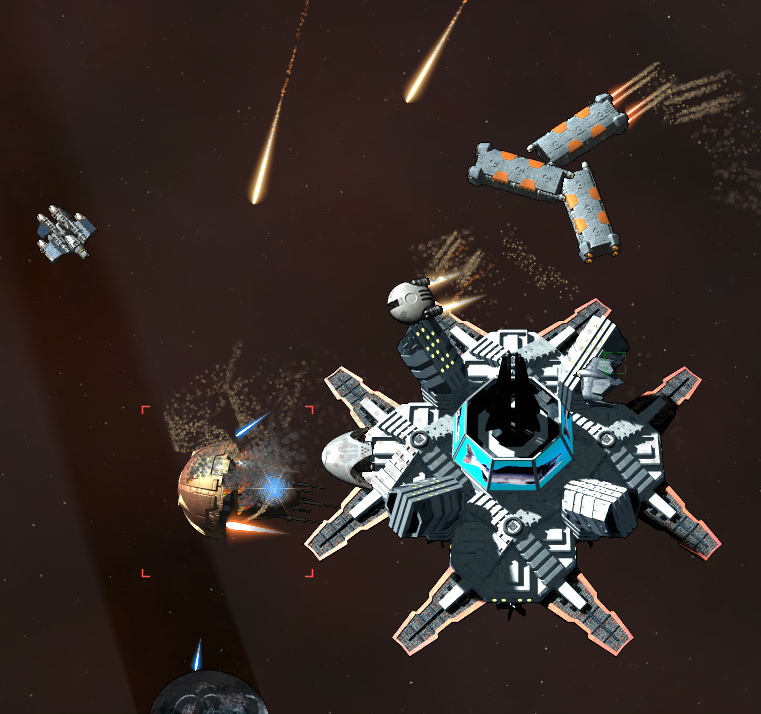 That's a random deimos on patrol I lured over to the station slugging it out with three EI7000/M missileships, a lategame Asterion with tritium weaponry, 2 Aldrin-class monitors (offscreen, weapon fire visible), a Centurion/X (later 2), and a Britannia.

Suffice to say, the Deimos lost. It's an amazing ship in SM&M++ but it's not *that* good.

The Aldrins in particular are performing very well indeed, and the AI changes to the Britannia make it far more credible....if no less suicidal. The big station-mounted guns are performing OK as well: 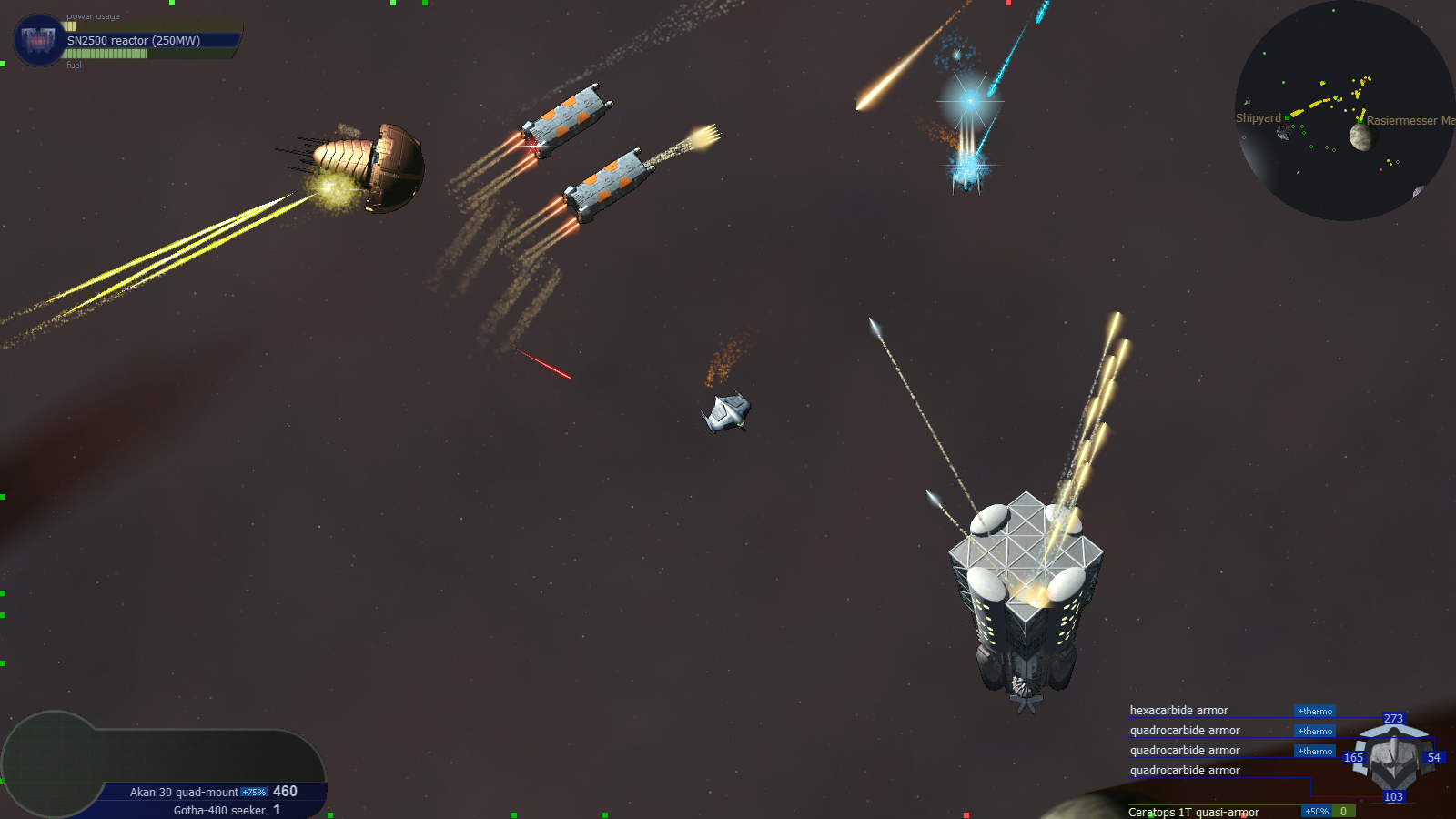 I'm getting pretty good at TLisp, what kind of code are you looking for?

Also, I guess I should probably try this mod at some point, huh?
Top

NMS wrote:I'm getting pretty good at TLisp, what kind of code are you looking for?

Also, I guess I should probably try this mod at some point, huh?

Converting damaged gear into tinker weapons (not the same as the custom-work ones...actual faction-built gear for selling normally.....which...I....still haven't added into the game...) based on what damaged gear they have in inventory. I haven't planned it out properly yet but I've got the beginnings of a plan for making buying from the tinkers an actual good idea

I'm not clear how that makes buying their scrap more useful (it's already useful occasionally), unless it's to control which items they're able to make.

But it doesn't sound too hard. Let me know when you have the necessary items and an idea about how to determine which items they make and when.
Top

Hotpatch to fix a crashbug with old saves will be up later today.
Mischievous local moderator. She/Her pronouns.
Top

Currently I'm in a holding pattern: 1.7B3/4 has broken a few things I need to nail down to see if they're fixable on this end, or if they need engine patches.

Xephyr has kindly agreed to convert a sketch (actually a low-poly model in sketchup) I made for a new ship into some actual graphics. The Nakamoto-class freighter is a competitor to the EI7000 and Antares II, built by Honoku-Tomashi. A far more modern design than the elderly Antares, it carries a smaller crew and is specialised for liquid and gaseous cargo..although it can carry containers with some modifications. Xephyr's still finalising things and getting them rendered, but I'm very pleased to get closer to having the ship in the game.

...it is going to be hell to get the internals set up.

Once that's in, and possibly a few other ships I'm working on concept work for now, I'll probably change the name of the mod and work on a major release.
Mischievous local moderator. She/Her pronouns.
Top

The first version of the Nakamoto is working reasonably well. Xephyr's done a great job on the art for this one. AI bugs mean I'm going to have to modify the plan for it a bit though. 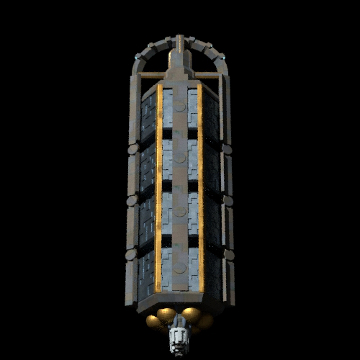 This is the hero/ship-select image that Xephyr sent me. Still debating whether to try making a playership that's a converted superfreighter
Nakamoto_Large.jpg (48.73 KiB) Viewed 4060 times

Being a Honuko-Tomashi design, the Nakamoto is going to use Bushido weapons and armor. Currently I have the basic gun setup (which is awful and needs a rethink because, again, AI bugs) and some placeholder drive and internals from the Scarab (which is a much heavier ship). While it's quite a large ship (about 170m long), the Nakamoto is a fairly low-mass ship. This is largely possible due to the fact it's not really intended to carry solid or high-mass cargo, so a lot of the framework is lighter than it would be on something like an Antares or EI-series. It's more like a modern-day LNG/LPG tanker than a container carrier...each 'hold' comprises a large tank with it's own refrigeration system (except the rear one, which is smaller to allow space inside the section for fuel storage and machinery) that can carry anything from industrial alcohol to liquid water to liquid helium for fuel production. It's very versatile....within its own niche. The outer frame is structural, but also carries pipes and electronics for handling cargo, and crew spaces for maintenance and general operations. Main crew quarters are in the front, between the bridge and the firewall/bulkhead for the first cargo hold.


If I do create a playership version, I'll probably make it a militarised version with a fabricator and/or auton bay replacing one or more cargo holds, with the rest converted into low-capacity cargo bays for general use.
Mischievous local moderator. She/Her pronouns.
Top

Eh, the old "things don't turn to point their guns at stuff" one. The Nakamoto has a single gun under the crew area at the front. It can't fire behind the ship (in-'verse it's occluded by the cargo areas), and because of the "let's point the right side of the ship at the target" bug, it constantly turns to keep targets outside of the gun arc. Basically the game takes a minor (intended) design flaw in the Nakamoto and turns it into a comedy skit.
Mischievous local moderator. She/Her pronouns.
Top

How big is the fire arc? And is it using standoff AI?
Top
Locked
391 posts