A place to discuss mods in development and concepts for new mods.
Post Reply
26 posts

I'm now working on a whole new round of changes to autons. Sadly I've run into some problems with the auton dealer inventories so my original plans for a wider array of low-level autons are on hold...but there's some good things all the same. Autosentinels are now level 2, and a non-defective version of the 200-series auton has made it into shops. Both the 200A and B have altered setups and parameters, and all commercial autons now have balanced setups rather than being skewed towards certain damage types. I'm also working to improve the accessibility of high-end autons, with the 2M and 3M being reduced in price and made into civilian improvements of the 1M, with the old 2M and 3M models now being reserved for a set of Pacific Defense autons using military-grade weapons.
Mischievous local moderator. She/Her pronouns.
Top

With the release of 1.8 I'm starting to close in on a stable release. Unfortunately I'm in a critical point for my studies IRL, so things may be a bit slower than I'd intended.


Auton reworking is going well now that I've shelved a few things to cope with the inventory issues. I've got power-limits reworked for the low-end autons and I'm about half-done on reworking the higher-level auton models for their initial form (their balance passes will take a bit longer). I've done some experimental work on tweaking the Constellation with good results, but unfortunately I've hit a small bug there that may mean I strip it out of the 1.0 release. Other than that, there's just a few balance issues based on testing.

The big one of these is swapping around some missile weapons, which shouldn't be too challenging (Talon Group will be losing their nukes and gaining the Icarus and IMP9 launchers, Sovereign Domain will be gaining them on a few platforms and losing the Icarus launcher on *everything*) but will require some fairly extensive testing so I don't accidentally ship a faction that can easily one-shot a level-appropriate player. No ETA because of my studies, but hopefully not too long. THe mod is almost ready to go (and it's entirely playable right now)


Edit: oh, and there's some annoying bugs slipping in that may or may not be my fault that I need to check on. Derakon ran into a gaian process with over a hundred P51 cannons in its hold while running the mod with other stuff and I need to see what the heck is going on there.
Mischievous local moderator. She/Her pronouns.
Top

Well, real life caught up with me in a bad way. But I'm back to slowly working on things. George is currently running the mod on stream, and I'm doing some fixes based on that.

....unfortunately I didn't get around to pulling the nukes off Talon Group before sending him the mod, so he's gonna have some fun with that in the Helgoland at some point. I'll hold off on those changes so that I don't mess up his savegame.


This week's fun challenge: Patching the Bushido Energy Launcher to work properly and have new ammo without breaking the savegame. I'm currently halfway through it, and drawing a complete blank on how to make the new BEL feel good to use without making it a copy of the Icarus. Might end up making it based on Dwarg magic ion bolt tech. 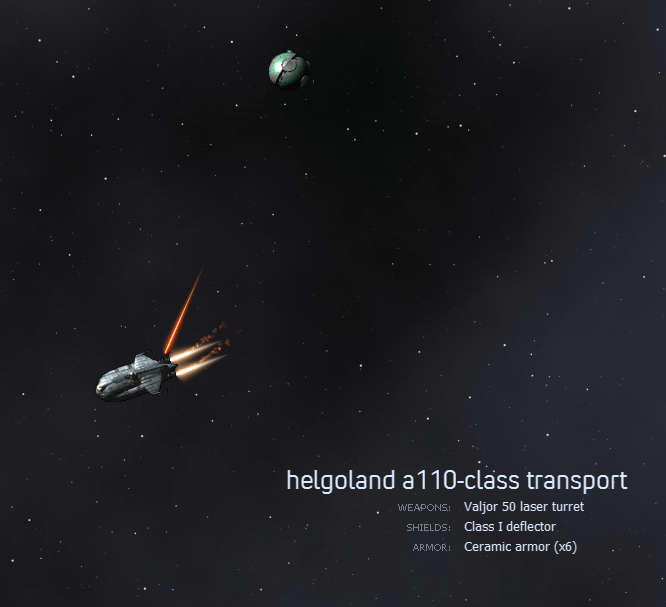 An early version of the A110 mockup. While the Corporate Command version still uses the Valjor (though a non-omni version), the Elemental Shift starting ship version uses a custom weapon from the Flenser family.
HelgolandMockup.png (232.04 KiB) Viewed 4534 times

The other big thing that...isn't entirely an ES thing any more is the introduction of the Helgoland A110. George did the art, I did the stats, and it's going into Corporate Command fairly shortly as an NPC and a buyable vessel. It's fast and commodious, but lightly armored (maxing out at regular armor) and slow to turn and accelerate. It features a +Omni boost to all non-sidemounted single-point-of-origin primary weapons from Rasiermesser, and is generally an excellent ship when you keep it moving and at medium range. Being able to outrun (or match pace with) slower gunships is extremely nice.

At present the Helgoland is using a placeholder graphic that George supplied, but when Corporate Command is appropriately updated (and public) I'll be swapping over to the CC assets as those are a slightly different colour. I might find a use for the mockup graphic though...

The current starting ship version. The ship description is a little clunky so I might chat to George about changing it before it goes live in CC.
HelgolandSelectScreen.png (130.74 KiB) Viewed 4534 times

Note: Don't get too excited about the Flenser 10. It's a fun weapon, but it's not a very powerful weapon.
Mischievous local moderator. She/Her pronouns.
Top

More things to show off:

The Dobson Projector has been remade into a functioning (hand-balanced for now) heavy weapon at level 8. The first time I've experimented with RepeatingDelay, the Dobson Projector fires three very heavy, very slow projectiles in a spray in front of the ship. There's an omni version at level 9. 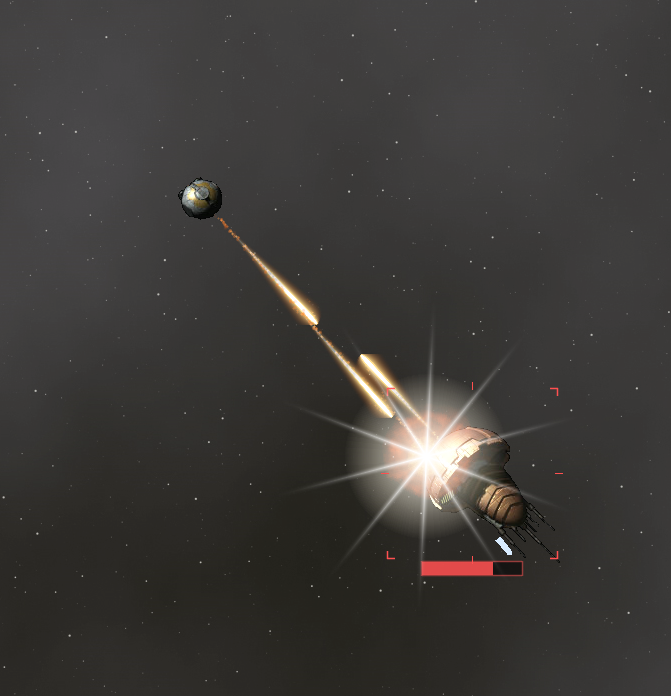 It does a lot of damage when it hits, but it's difficult to use, befitting of its status as an unusual civilian heavy weapon.


Other things I worked on before this weeks stream that I'm just tidying up now: 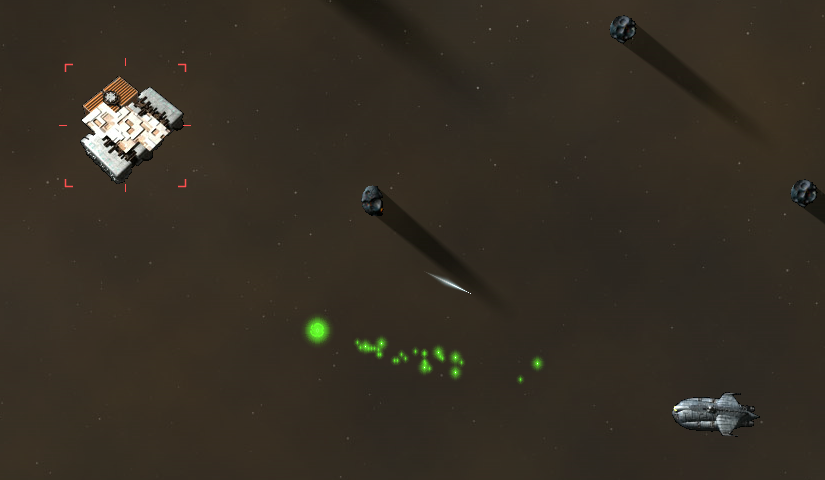 The Bushido Energy Launcher got a complete overhaul. For the time being it only has three missiles, though this may change later. This is the basic missile you'll probably be firing a lot of; the BEL-15. 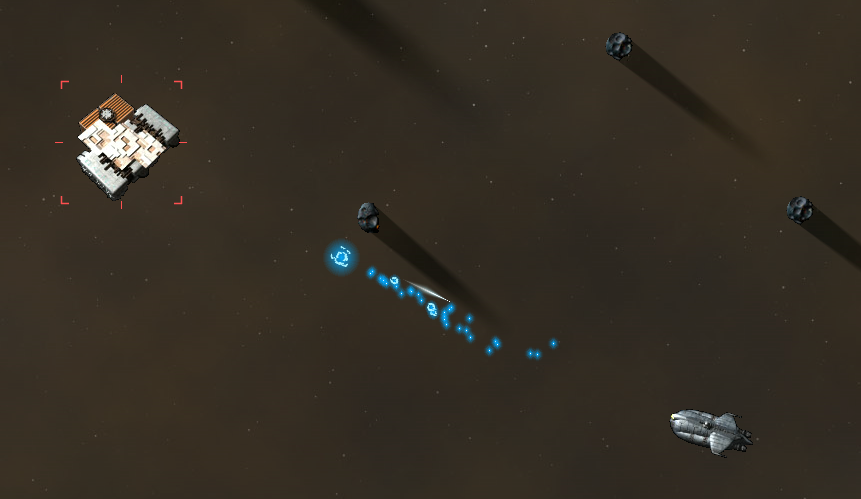 The tracking on BEL missiles is rather lackluster (deliberately), hence why the BEL-15 in the first screenshot missed and let me get a second screenshot from the same station.
BEL2.png (240.23 KiB) Viewed 4502 times

The BEL-55 is ideal for tougher targets (unlike this anarchist station), but is a bit more expensive. Unlike the stream version, it no longer costs 100cr every time you fire it.

Finally the rare and somewhat more expensive BEL-X brings a reasonable amount of positron damage to the table, and looks fantastic as well.

The BEL currently doesn't appear on enemies ingame, but that will change before V.1.0 comes out, replacing some of the more...troublesome...missiles currently in use. 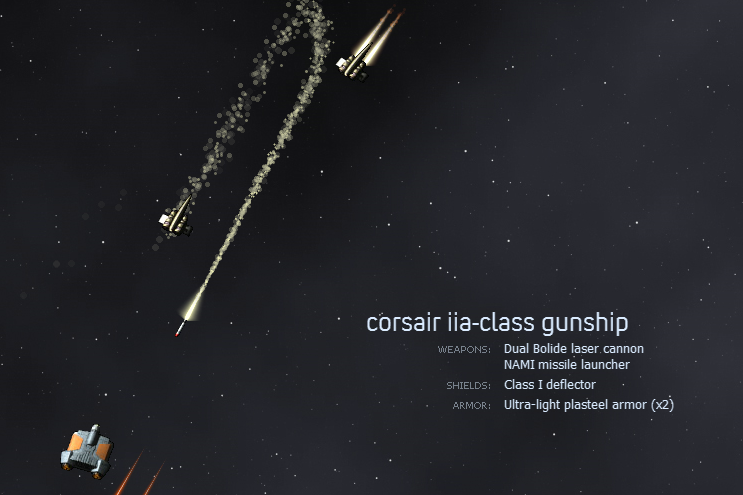 Finally I've fixed a longstanding problem and updated the marauder ambush tables and the 'intercept convoy' militia mission to use the Corsair IIa, not the Corsair II. This brings them into line with the station encounters. The corsair IIa is a considerably more credible ship than the standard model II, and much more suitable for marauder missions.

Other things I don't have pictures of right now are the Type 7 cannon, a thermonuclear tracking weapon from Taikon using ammunition based off the TM7's submunitions. It's designed to compete with the Kunitomo (vanilla thermo cannon) and the upcoming military Akan weapon. I've also reworked the IM90 into a positron weapon, with two weapons in the Type 90 line leading up to it. This brings the number of positron weapons in the game with Elemental Shift running up to nine, with weapons from the Ares (stock), Bushido, Earth Industries, Ringers (stock except for a custom effect), and Taikon making up the numbers.
Mischievous local moderator. She/Her pronouns.
Top

Today I got the second iteration of my tweaks to the Anaxas mission (destroying the Cyclops HQ) to work. I've since redone the ship tables to tweak what goes where (and also added a little more variety), but here's some shots from my test run: 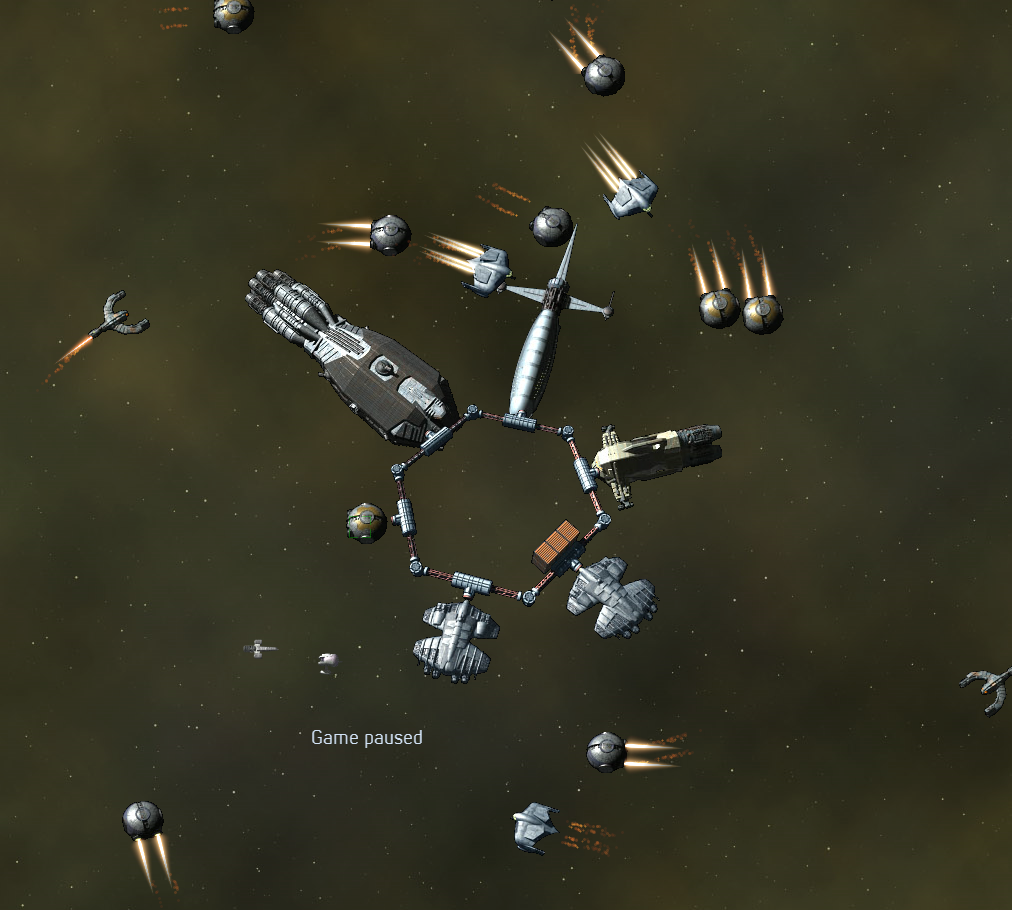 Anton and Kate brought friends! Friends that aren't all in stock Ronin/C gunships at that!
ESPromo1A.png (737.94 KiB) Viewed 4475 times 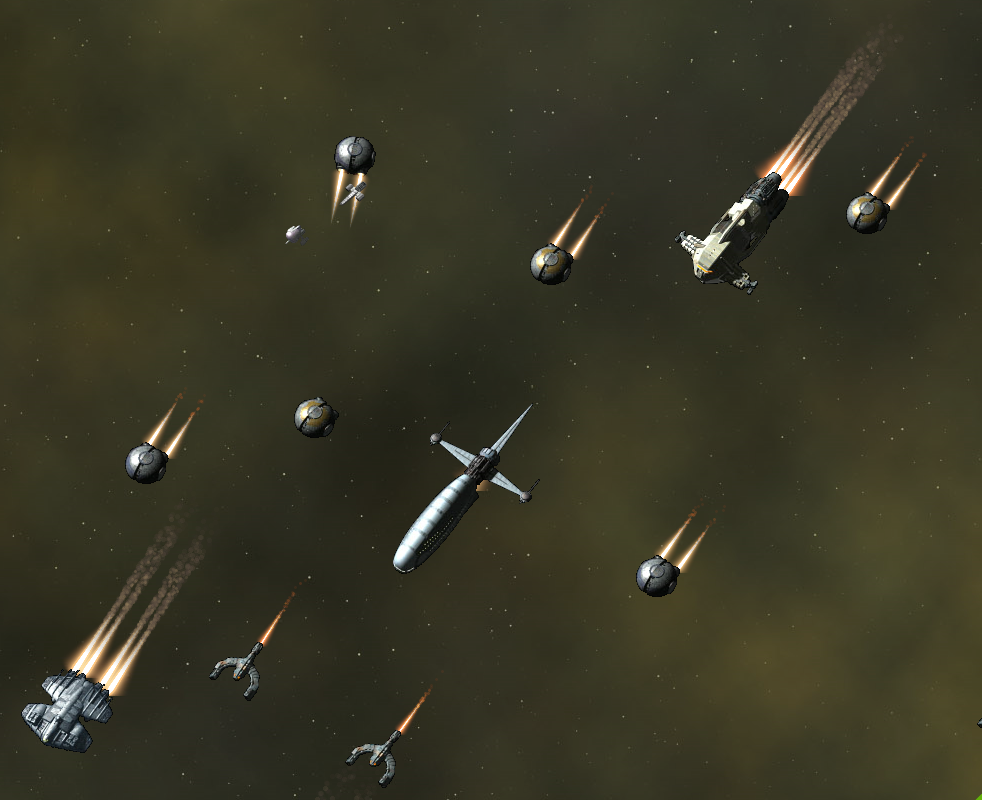 The mission code assumes that all ships have the same speed so they spread out a little. This will get worse in the next version, because I added a manticore to the mix. It still looks pretty dang impressive.
ESPromo2.png (490.25 KiB) Viewed 4475 times I've since moved the Likho and Frey-class gunships onto escort duty for the Troglav and the two Sigyns and added some more advanced gunships to the mix on the main attack force, so hopefully things are a *little* less hectic. It's still generally a close fight with this particular mix, so I'll have to see if my changes improve things or not.
ESPromo3.png (653.47 KiB) Viewed 4475 times

Aury has done an excellent job modelling up a ship that's been on the 'to-add' list for Elemental Shift for about two years now: a reimagining of the very old Mikeno-class that used to be in the game assets. 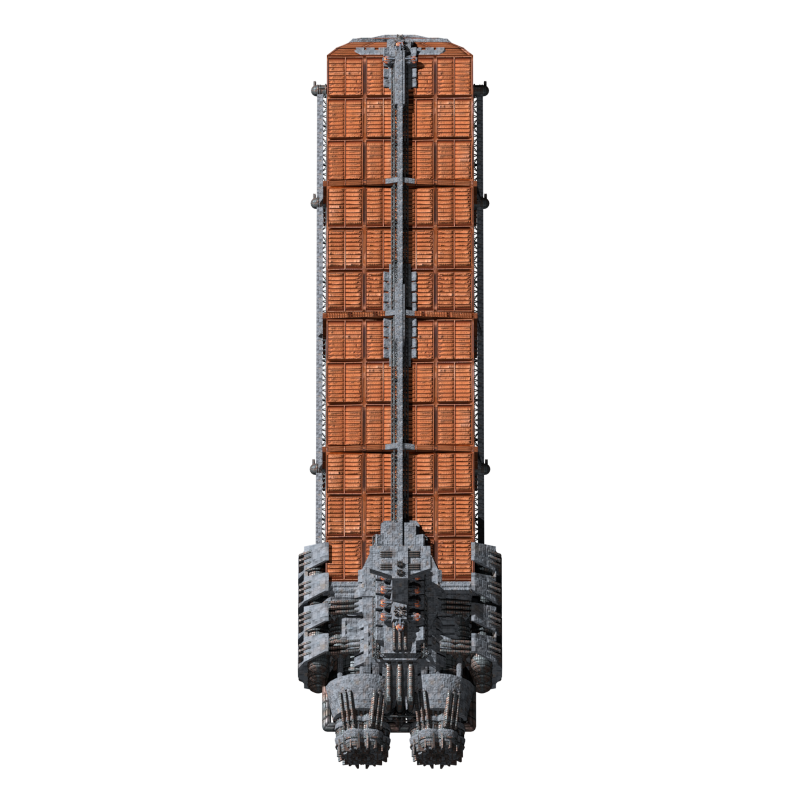 Aury does really massive hero images so I had to rescale this myself. Love how WIn10 doesn't have any way to resize images with transparency unless you go download GIMP for it. The final version also has escape shuttles/lifeboats, which aren't in this hero image.
MikenoHeroSmaller.png (324.51 KiB) Viewed 4422 times


It's now a hyperfreighter, and it's gonna be pretty big. Not that big though. It's about 530m long, rendering at 357x357px ingame, and can carry ~2.4 million cubic meters of cargo. It is not going to be a common sight.


As to when it'll be in the mod...I'm not sure. I usually rely on AP for compartment/drive/weapon placement work because I am not very good at it (the whole 'can't visualise' thing doesn't help). But it'll be there eventually.
Mischievous local moderator. She/Her pronouns.
Top

One month on, and a few things have progressed quite nicely. The big change is that I've started integrating both vanilla and ES vessels into the Ship Broker system. You can now pick up and fly the following in shipyards:

ES Originals Vanilla or modified-vanilla ships
The to-do list is still quite extensive, with the Naga, Scorpion, Oromo, Sotho, Sirin 3 (both A and B variants), Likho, and a bunch of other craft needing upgrading to modern hull coding before they can go into shipyards. Currently I'm not adding any new shipyards, so when George gets around to adding the ringers and black market shipyards' broker functions I'll need to work out how the filtering works.

Which leads to a change that's coming up: I'm going to have to either add more hulls you can start with (and filter them by difficulty level), or remove the current lot and replace them with more....basic...vessels. Just to encourage ship changes.
Mischievous local moderator. She/Her pronouns.
Top

I hope you're well. Any news or progress towards the ES public beta release since the summer?
Curious about real-life aliens? www.antareanjourneys.com
Top

There was a bit. Unfortunately things went pretty badly for me for a while with health and RL issues. Again.


I'll try to get back to ES at some point, but it'll take some work just to get it up to date with the current version.
Mischievous local moderator. She/Her pronouns.
Top

And, courtesy of AssumedPsuedonym doing a bunch of work to get some of the more annoying bits done, Elemental Shift now runs on semi-current versions. I'm still going through and updating older stuff, but I'm thinking it'll end up on the multiverse sooner rather than later. Given my career plans are on hold until the pandemic dies down, I don't have much else to be doing.
Mischievous local moderator. She/Her pronouns.
Top
Post Reply
26 posts