4. missing Huari, altho this might not be a bug, just unlucky.

5. Howitzers no longer agress (sometimes) the larger creep who get in between u and station your shooting at / they defend.

6. very barren spawns of stations creep and even missions in starting systems, also up to about St. Kat. (and in 1 run Up to Eta Ceti ! )
Top

Since this is an alpha version, do i need to report small issue's like:

Is this known / useless info, or is this actually usefull to anyone?

I'm not sure exactly what item you mean. It looks like Ares outposts should drop items of at least level 7.

If you haven't played recently, nearly all vendors were changed to have more items around the system level or one level higher and fewer items of higher and lower levels, going up to at most 2 or 3 levels above the system level. Overall, I think that was good for game balance. Does that look like what you're seeing?

Although they mostly have level-scaled items, I think they're restricted from having military items, so they generally won't have useful weapons, shields, and armor in the late game. Whether this makes sense is debatable.

The EI500 was changed to have 50 base cargo space and get 150 from a trader's cargo bay. I don't like this change either. It means you sacrifice a lot of maneuverability and weapon slots for a cargo space benefit that only works with that kind of cargo bay. If you can tolerate an even slower ship, you can buy an EI200 at a ship broker and have even more space regardless of what bay you use, but not so many slots.
Top

As for the loot, yeah this playtrue is now 6 days old, and am still doing it... sounds good tho.
Ares posts dropping blast and other crap armor isnt all that funny ;-p
Ill do a new run soon, constellation for the drones or EP

Hmm, wait now i recall... those are the stations that always got blown up... nvm, now they live! Hahaha!

If you can tolerate an even slower ship, you can buy an EI200 at a ship broker and have even more space regardless of what bay you use, but not so many slots.

Ok so i started a new playtrue, it's 2 days old now.
Loot still out of place, for example the AK505 starters seige weapon, shows up after mk3 or even at the same time as thermo mark5.
Altho i DO LIKE the randomness of armor segments, some combo's are kinda od looking.... still an improvement tho ^^ (a good idea of making armor segment more of a competition between them, i like the progress

Immaa keeping it!!.. just because! xD

Anyway; some stations still blown up, like thinker, those get shot way 2easy by proximity of other stations that spawn in a system.
Altho i am for more stations in a system to avoid boredom and barren systems, an space between pirates who dont like one another or even direct opposites would be nice.

Talking about barren systems, the difference between Eridani and Tau Ceti is vast, even if u started in Eridani. ((Wasn't eridany due for an overhaul a while back?)) Even so, this is not the worse still, after Eridani or Tau Ceti the systems are still very sparse in stations of any type. It is almost like the game ''starts'' a couple of systems after St. Kat, an overhaul i strongly recommend. Especially to impress new players.

For example:
-disposable missile launchers, these can be made external weapons.
-have the starter weapons (laser /turbolaser / others) have an external version (one or 2 (for choice)that drops in station loot since drops from destroyed wrecks would be 2rare / damaged / destroyed.
-starting ships all 25MW to power these things, and bring CC starters in line whit regular starter ships
-all pirtaes and other ''red blow up stuff'' alot stronger to coop whit this increased firepower **
-have the pirates also have the external laser or missile or whatever, ( at the moment midway game all of the sudden every ranx ares and kobols and thier grandmother
have external weapons, but no build up to those by previous versions)
-all the above now gives more fireworks, make sure u (aka new players) have something to shoot at
-if u do take my suggestion, ad a micro benedict mission to fit, and warn for damage of externals
for all the above the overhaul of Eridani is kinda needet.

**this would allow some of the pirates armor types segments (5hp? lol

not onley to get an increase, but an ''activation'' of useability/ feasibility as previously discussed elsewhere on these forums.

Dman, i type 2much.
Shaping up pretty good tho, keep it up !
Top

I tihkn the frigates are ordered to hold in the code so won't move. The idea is that they receive reinforcements and then order them to attack the freighter and player (not sure)? But I agree it should probably try and kill the player if they are in range, but maybe not the freighter as that might be too unbalanced. It might need a new order; 'attackPlayerFromHold or something.


4. missing Huari, altho this might not be a bug, just unlucky.

I ran a couple of games and checked the Huari fortress numbers. The numbers varied widely. Station numbers from 10 games:

Anaxas was well represented. Six games had fortresses there. Usually multiples (4 in one game).
Fortresses occured from C5A to EC (CC: Anaxas and AXS1).

Looks like it is just the (bad) luck of the draw to get none in a game.

I've noticed this too. Some systems can have only 3 or 4 stations. I think this is intentional as the systems don't have many asteroids or planets so you would expect the station numbers to be low, but it can make the game a bit bleak. One system type is called "&ssEarthSpaceDesert;"! Not expected to be a highly populated system!

There is a mod called "System Density" which increased station numbers but I'm not sure if it works in current game versions. I always played with this mod back in game version 1.1. It is on my list of mods to update but don't hold your breath. I know very little about system code.

Additionally:
I don't think you will ever see external weapons in SOTP. I don't have any info but I believe this is a sort of bonus for when you buy Corporate Command (to encourage interest). Similarly you probably won't see the auton bay in SOTP either. CC is a great addition and definitely worth getting because of these features.

I hadn't noticed the change to the EI500 cargo capacity. It seems a bit odd. Now the EI500 is the same as a Centurion but much slower and with more slots!! But it has always seemed odd to me that a Centurion could have 200 tons of cargo space (shrugs).
Stupid code. Do what I want, not what I typed in!
Top

There are no side-mounted weapons in the core game. You need Corporate Command, or third-party mod, to add some. NM900, while not side-mounted, is external, and can be found in the core game.
Download and Play in 1.9 beta 1...
Drake Technologies (Alpha): More hardware for combat in parts 1 and 2!
Star Castle Arcade: Play a classic arcade game adventure, with or without more features (like powerups)!
Playership Drones: Buy or restore exotic ships to command!

I do have CC and my runs are whit CC, usally, or EP.
Anyway, the point was that in CC there are no side-external more basic weapons.
Somewhere mid game almost everything gets side weapons (well not every ship, but plenty of them).
While at the start of a CC game none get laser side weapons, or turbolaser ect ect.
Because (as far i know) side mounted laser weapon does not exist yet.
It is a bit off topic tho, since it isnt really a bug.

than u get 150mw
this one seems to spawn more lvl 7 fuel rods (it cant use yet)
the lvl7 fuel rods are ok for 250mw
having a big stack of lvl7 fuel rods, i cant determine anymore if system spawns enuf for 250mw normally.

The few side-mounted weapons in Corporate Command are all high-level Omnithor loot. You may find few for sale in the Outer Realm, but you probably need to beat up Omnithor for them.
Download and Play in 1.9 beta 1...
Drake Technologies (Alpha): More hardware for combat in parts 1 and 2!
Star Castle Arcade: Play a classic arcade game adventure, with or without more features (like powerups)!
Playership Drones: Buy or restore exotic ships to command! 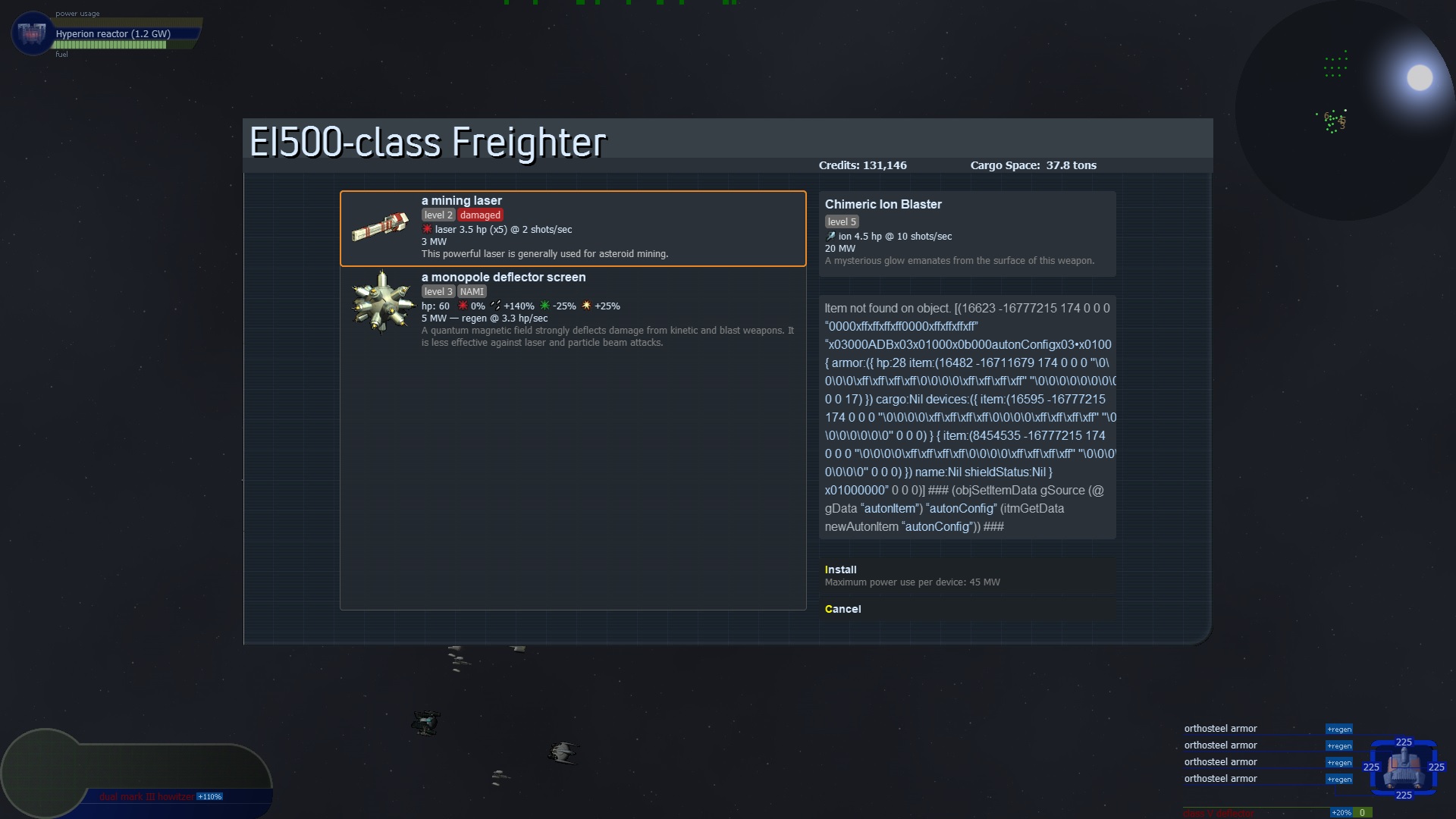 Maybe George's implementation of automatic auton armor repair by the auton bay can cause the auton item to change in an event while the screen is open? When I implemented shield recharging in the bay, I managed to avoid that, but doing it for armor might be even trickier.
Top

y, i can see armor mentioned in that bug code line.
This happened during a switch of a gun tho, not armor, as seen in picture 1
Top

If I'm right, it doesn't matter what item you're replacing. The problem is that the auton item you attempted to modify can't be found because it has changed since the screen was opened. So it will happen any time you attempt to modify an auton with damaged armor and wait in the screen long enough for armor repair to happen.
Top