Question: What is the "best" tech level?

I asked this question some time ago in the Era 3 thread, but never received a concrete response. So I decided to do a little experimentation myself...

1. For simplicity, we will only consider choosing between TL 7 (for non Earthlike, ocean and underground worlds), 8, 9 and 10. This is because the max habitat upgrades (i.e. max population) can be attained at TL 7 and 8 (E/O/U) respectively. Desert and empyreal worlds do not support any upgrades, they will be discussed separately.

2. Units. To build the objectively "good" units i.e. Adamants, Minotaurs and above, we require at least TL 8. Therefore our yards and autofacs should be at least this level. We consider Tl 7 only for non E/O/U production worlds.

3. Consumption. The amount of organic food, durable goods and luxuries required per unit population increases exponentially per TL. This metric is further complicated by population fluctuations between TLs and habitat upgrades (discussed below).

5. Production. At higher TLs, more resources are produced per unit population. As before, we should consider if the production bonus of higher TLs outweighs the production bonus of higher populations, and if so, by how much? This is also complicated by world efficiency, so to be as fair as possible I conducted tests on worlds with similar efficiencies, but obviously can't be 100% accurate.

4. Population. As population and TL increases, so does production and consumption. However, population scales inversely with TL, but can be increased again with habitat upgrades available at TL 7 and 8. The question then: which has a larger impact on consumption/production? 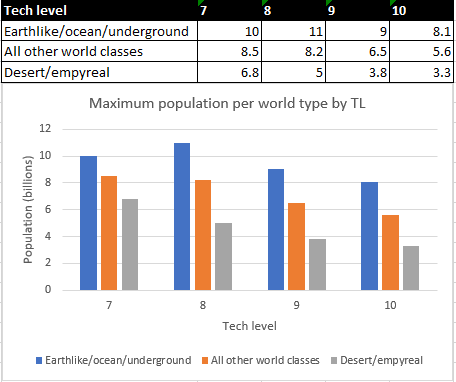 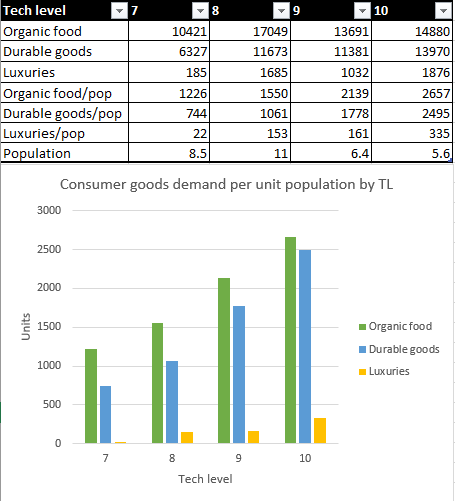 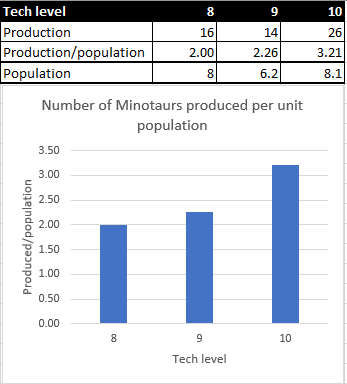 So... what does this all mean? Tech level definitely has a much greater impact on production/consumption than population. Perhaps as an unintended side effect, this makes low tech levels especially undesirable, since high tech ships are both more powerful in combat and can be produced in greater quantity. Additionally, the "penalty" of exponentially increasing consumer goods demand at higher TLs is easily offset by conquering even more Earthlike/ocean worlds and raising them in turn to TL 10 to act as suppliers, which is made even easier by availibility of said powerful combat vessels. This was probably not the original intention.

A better system would be similar to the Protoss/Zerg distinction in the classic RTS Starcraft (yes, I know its dated). Protoss units are powerful and expensive, while Zerg units are weak and cheap. Right now it is possible to produce Minotaurs in much greater quantities than Siriuses, for example, due to the production bonus of higher TLs. Thus, no one in sound mind would opt to keep their empire at a low TL.

My suggestion: swap the system around! Remove the production bonus of higher TLs and apply it to lower TLs (inversely). So lower TLs would still be stuck with the same crappy ships, but can churn them out in massive quantities. At TL5, one should be able to produce as many Sirius gunships as a TL10 Minotaur yard could previously. This is still balanced because Minotaurs were just as powerful as before, but instead of a mature empire having 5-6 million of them at TL9/10, they would only have 1-2 million to compete with a TL5 empire with 5-6 million Siriuses.

Thanks Imperator for putting all the effort into this question.
It's something I've wondered about often. I was often keeping consumer good at TL 7, and tri & hexa at TL6, thinking they didn't benefit much from the higher TLs.
But apparently, I'm wrong.

I also agree that based on your results, it doesn't make sense then to build lower level ships or keep any worlds at lower TLs. This of course, reduces the strategy of the game, if all you do is level everything up to TL 10, since there are no trade-offs for doing so.

Your solution does seem like something that is in the right direction. I've also wondered if the time it takes for worlds to level up there TL should be longer. Back in the old Anacreon (turn-basd) days, it seem like a much more exciting and bigger deal just to get your worlds up to Bio-tech, and even more so if you could level up past that. It made leveling up worlds much more rewarding...where I feel a bit of that is lost now. On that note of nostalgia, I really do miss hunt killers and building SRMs mines (I think it was SRM?).
Top

This is some great number crunching Imperator and it supports my personal, less spreadsheety observations. I totally agree with the whole lowtech vs hitech ship numbers but I think a better way to go about it would be to greatly raise the attrition cap for lowtech ships but leave production untouched. After all, it's easier to maintain a crude piece of junk than a fancy hitech one. I also favour increasing attrition caps massively for planetary defenses. I might actually be willing to spend 5% of my production on them if they could build up to meaningful levels over time.

With the production/pop consumption numbers it looks like my personal theory that all worlds in a cluster should be TL10 apart from CGA worlds which should be TL8 is correct. Unless I'm reading things wrong?
Top

Perhaps tomorrow or later today I will attempt to post my idea that I came up with. I already attempted once, but... the internet cut out and it was all deleted.

However, a quick question, darkMATTER by "meaningful levels" are talking about the hundreds of thousands worth of defenses that are not useful to defend world that are making anything, i.e. hubs, tech worlds, SC's? Because I have noticed that the only thing those protect against are mid-sized empires and smaller, which.. aren't really a threat to the super large empires that the players have which use those techniques. The only defense against those super large empire's is to have a sufficiently large fleet yourself, but which will normally be out maneuvered anyways. So it really just comes down to how well you manage the initial attack/defense. It doesn't seem most players are up for what it means to take on the larger empires. It is less of a war as it becomes a phase change in your game play for the time being. You guys seem to mean "war" as a series of hits to kill your opponent, but this game has another dimension to "war" that can be played. But I digress, I'll talk about it in my next post later.

If what I mentioned is what you are talking about, then I agree with you. Since the game, as it stands, is "attack while the other player is AFK incentivized" there needs to be a massive overhaul on the planetary ability to defend without becoming impenetrable. No matter how it works out though, it will only encourage even larger forces to break the defense. If the attrition was kicked up a notch though, a blockade could be effective since right now it takes so dang long for those 10M strong fleets to attrition.

Ok, after typing this up, I'll absolutely have to give it another go as far as typing out my idea again for you guys. I think it would work really well, but it fundamentally changes the game. I'm not sure George would be up for that.
Fire, Fire, Fire;
Streaks of golden light,
Rays of cosmic waves crashing through still dead night.
Top

My impression is that tech level is dependent on geography. Raising the TL of CGAs gets more output but also burns more trillum. So it's not practical to raise every world to TL 10 unless there is sufficient trillum density. I find the most compelling reason for raising TLs to be habitation structures. You get more productivity/population AND more population.
I find the problem with ships is that there is no qualitative difference between the different TLs. Right now it just so happens that the higher TL ones always win out (eldritches vs stingers, minotaurs vs siriuses, gorgos vs defiants, etc). An empire would always build the former and never the latter. If the numbers are tweaked so that lower tech ships are more efficient, then the situation would simply be reversed: low tech would always trump high tech, which presents the same problem.
To continue the starcraft analogy, I feel that low tech ships should be like terran marines and zerg hydralisks: bread and butter combat units, whereas high tech ships are like protoss arbiters: specialized, expensive units that are neither practical nor useful to spam. That way, regions not so rich in planets and resources can still be used for low tech facilities that produce more than fodder, and places where stuff is plentiful could support more complex infrastructure for making more exotic ships.
Top

I believe that the best way to compare planetary efficiency at different TLs would be WU efficiency. This is the total WU generated by the planet, divided by the labor cost of all consumer goods consumed by the population plus the labor cost of the trillum used to produce those consumer goods. The WU cost of a supporting foundation trade route (if one exists) should also be considered. Any planet can be maintained at or below TL7 cost free with an exploit.

Hazardous worlds don't just have a lower population cap - they also have a significantly lower WU efficiency since they are always spending a fraction of their WUs on their hab structure, and dividing labor between multiple tasks cuts total WU output.

It is also worth considering that in a competitive game, most planets maintained above TL7 via foundation routes will occasionally see TL drops and associated loss or wastage of WU output due to enemy activity. Another complicating factor is that planets' TLs are not actually integers, (e.g. a planet's fated TL could be 8.6) although this is not visible to the player.

gc2 is right that trillum is a major limiting factor. I think this would be a good paradigm for all minerals - raising TL should increase production linearly and CG consumption (which is a major trillum sink) exponentially. For scarce resources going tall would make sense; for abundant ones, it would make more sense to just hook up another TL7 world.

The whole TL scale is skewed by the mechanic that pulls all worlds in player empires up to TL5 ASAP; in practice half the TL scale is almost irrelevant since such planets are never part of your empire for more than a couple of hours and are therefore rarely called upon to contribute anything.
Top
Post Reply
6 posts • Page 1 of 1