Awesome. Thank you so much for the feedback. I live in fear of unknown bugs which I just cannot test for as the adventure is so large. Special thanks for confirming that the original SOTP missions all work. This was a concern as the coding was relatively untested.

Quickly, there are more missions in the original mod but they haven't been included yet.
The stargate rod mission will eventually offer a choice of locked stargates. One or the other, but which one?
Korolov weapons are freely available at this time as a placeholder until the second Korolov mission is included. Then the weapons will only be available via the missions.
CSC-IIs offer escorts but are also upgraded. This relates to a mission which still needs adding.
No interaction at this time with the rebel Ares or expanded Commonwealth/Ares.

Could you please attach your debug.log for the game? This would be invaluable in finding the cause of the crashes.

I'll do a more complete reply offline and post it next time. Thanks again.
Stupid code. Do what I want, not what I typed in!
Top

I think the CSC-II wingman bug is fairly straightforward. It shows up as: "Insufficient arguments ### (objRegisterForEvents wingmanObj) ###"

The crashes in the Lexington system are more ambiguous, because the debug log doesn't seem to register them. The error message comes from outside the game. Windows (WINE) gives a message that says "Transcendence has experienced a serious problem and needs to close."

As far as vanilla SOTP missions go, I was able to complete all of the Arena, Korolov, Benedict, Dvalin, Militia, and Fleet chains. I got Volkov and Rama, saved the Antarctica, got the Ion9.

The ending of the Huari missions triggered before I ever went to Huaramanca. When I destroyed a Dragon Slaver near a Sung Palace and then docked with a Huari Temple, I got the closing dialogue with Apotamo as if I had just completed the entire Huari mission chain. The broken QAC I picked up was repaired.

Heretic seemed okay, though the Iocrym station attacks may have been irregular. Sometimes there would be enough time to rescue a station and sometimes not, sometimes one blue lobster and sometimes five. I wound up losing almost all the stations.
Curious about real-life aliens? www.antareanjourneys.com
Top

Thanks again. Alandra. You have done well and found everything that is currently in the mod except an "Escort a CSC-II to a stargate" mission. There is also a Corporate/Black Market system between Rigel and Charon which can be profitable for trading.
I'll fix the escort bug. Thanks.
Hopefully the Lexington crash isn't Wine related. I know nothing about it.
At a guess, the game assumes a unique Dragon Slaver so if one gets destroyed out of the mission chain that probably triggers the end of the missions. Should be able to work around that but I might ticket it so George knows about it if that is what is happening.
The Heretic results you mention sound typical to me, the timing of sentinels seems to vary widely in my experience but I'll check it.

Background.
The Network mod is a separate adventure but with the same storyline as Part I:Stars of the Pilgrim.
Instead of a single line of stargates leading to Heretic there are three roughly parallel lines of stargates but with many offshoots and links.
Gameplay is the same as SOTP. Start in Eridani and travel on your religious journey to the Core via Heretic.

Semesta IGC compatibility is built in and I have a beta version which includes Corporate Command compatibility but am reluctant to release this without hearing from George. If you would like to test this let me know and I will get the code to you somehow provided it is not distributed.

There is expanded but limited Korolov content (one mission, two more to come) as you saw. Also a prison mission.
A CSC-II is used in a very basic escort mission.
Also expanded Commonwealth/Ares and Corporate content. This includes a lot of NPC fighting but nothing more at this time.
There is a Ares Rebel faction as well but they only have inert stations at this time.
The Sung have a larger presence as do the Huari but this was cut down significantly for release as the code was too time-consuming to update.
A Black Market mission was omitted for the same reason.

Future updates will primarily add missions. I struggled wih the mission code for quite a while but a lot of help from community members and perseverance has helped me understand it to a point where writing the code for new missions is now possible.

The original mod was by Drako Slyith and by referring back to this and pixelfck's Network Reparied version I have been able to piece together some of the original intent for the mod. But bear in mind that a mod of this size is never 'finished'. There will always be something more to be added or upgraded. Ideas are always welcome because although I can grind through code until it works I am not very imaginative. Xephyr recommended adding missions from the CSC-IIs and this is on the list of things to do.

If you would like to try modding any ideas you have, your code could to be added straight into the mod. I am eternally grateful to DigaRW for supplying the 'Target' module of the Taipan GodShip.

Hope that helps.
Stupid code. Do what I want, not what I typed in!
Top

I found this thing. Happens either when mods are used / not. 1.9 Beta 1a 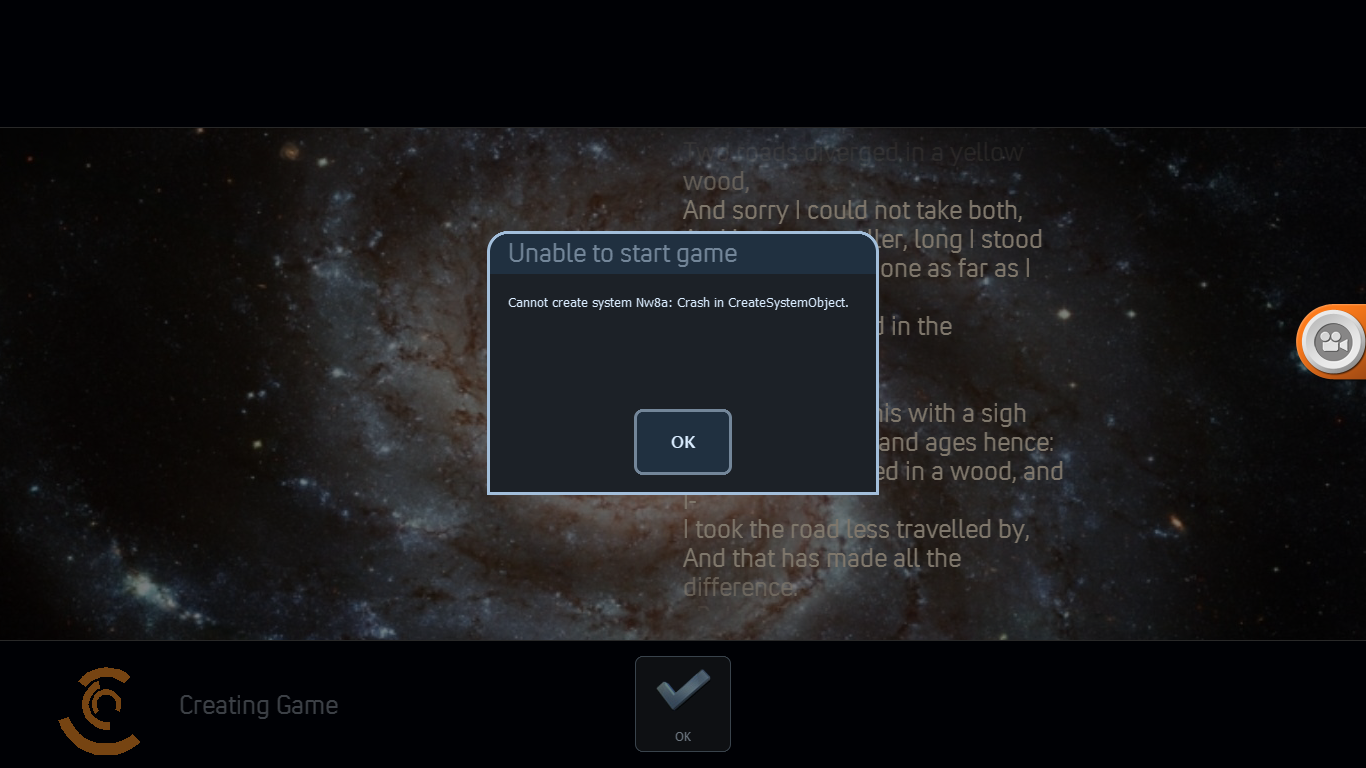 Thanks. I'll look into it. New LA is a custom system so I've probably messed up the code! Or it might be a game change. I have fixed a couple of the previous bugs and have mission code in the next version.
Not much time for Transcendence lately

I've only got to Dantalion in The Final Strike, haven't even looked at TBR yet and now Semesta is getting rebooted! Not enough time!
Stupid code. Do what I want, not what I typed in!
Top

So you mentioned this on other thread and I looked at this.

The question is, just how many systems does it create?

And does it compatible with the official expansions? (it seems the answer is no for this one)
Top

Around 80 systems. I can't remember the exact number off-hand. And thanks for the nudge, I might add some optional systems to mix it up a bit. Cheers.

I do have a development version which adds CC.
And I have done nothing about checking for the Near Stars expansion yet. I think that will be a bit harder so may have to wait.
I'll make some time to update and release a new version. It was fairly easy to fix the bug Amteloletom found.
Stupid code. Do what I want, not what I typed in!
Top

The forum won't attach 2.8 MB zips so the latest version is here:
http://xelerus.de/index.php?s=mod&id=1632

Probably lots of bugs, the standard SOTP modules need checking for updates. Still can't replicate a crash in Lexington though.
Known Issues:
Stargates in Rigel can overlap.
Terek's map icon is white, not green.
Stupid code. Do what I want, not what I typed in!
Top

Thanks for the work. The Near Stars Expansion does have some of the very interesting stuffs so I think it is still worth for hassle if you have time. Does not need to have CDM or Eternity Station functional, since in base game's Near Star connector that is not the case as well.
Top

Updated version now on xelerus.
http://xelerus.de/index.php?s=mod&id=1637
Requires game version 1.9b3 or higher.
Mainly just a bugfix because the previous version wouldn't start in 1.9b3. Hat-tip to DoctorGoat and Syamers24 for the bug report.


wnmnkh wrote: ↑
Sat Jul 25, 2020 6:15 pm
The Near Stars Expansion does have some of the very interesting stuffs so I think it is still worth for hassle if you have time. Does not need to have CDM or Eternity Station functional, since in base game's Near Star connector that is not the case as well.

This is looking more and more likely. I have been playing with CC and Near Stars recently and really like it. Plus the amount of content in SOTP is increasing rapidly so it really isn't viable to try and keep up with all the changes.
George has added some features recently such as SystemMapOverride which I think would make it easier (but still a lot of work) to make the Network an extension of SOTP instead of the current standalone adventure. This would allow access to all the current content in SOTP, CC and Nears Stars.
But IMO this isn't worth doing until the release of a stable version so don't hold your breath!
Stupid code. Do what I want, not what I typed in!
Top

Many, many thanks, wnmnkh. You've cracked it.
You put the thought in my head that I could use overrides to add the Network to SOTP. And it worked! Corporate Command and the Near Stars are also available.

Attached is the Network as an extension of SOTP. Unzip it into the Extensions folder.
At game start, click on the 'Network Extension' mod and all the Network features and systems are available. If you have CC or Near Stars then they will be included in the Network galaxy too.
All the playerships and missions are available.
Awesome. I've renamed a star system after you in thanks!

It hasn't been tested much and is a bit untidy. I'll fix a few more things over time to make it more polished.
Thanks again.

Stupid code. Do what I want, not what I typed in!
Top
Post Reply
26 posts