I created a pull request to implement most of the stuff on Imperator's list. Mesophon purchase costs do not appear to be part of the library.


TheBugKing wrote: ↑
Sat Mar 25, 2017 7:50 pm
Does it stand to be reasonable for requesting a larger map size? 5000 star systems is enough I agree, but the map feels a bit crowded from time to time.

It looks like mapSize can be redefined for the Fallen Worlds scenario but I didn't put in a request to change it because the nebula-producing code is quite elaborate and I don't know how it would respond to a different-sized map. George probably knows. Given the reduction in mobility that jumpbeacons have introduced, I'm not sure how I feel about a more spaced-out map- it could be interesting, but it would have to not be so large that capital starships can never get anywhere (unless they were also given a speed boost).

Another thing that I think would be worthwhile to implement before a new game - and which could be accomplished by changing the libaries - would be to either tweak the names of planetary resource abundance traits or add icons that show the modifiers they impart. I think players would benefit from the game explicitly telling them that "minor trillum deposits" are actually "minor trillum deposits (-50%)". Additionally, the planetary biosphere traits should not have "hidden: true", since these traits impart production modifiers to organic food. (e.g., I just discovered that empyreal worlds get a food bonus.)

On the topic of production modifiers, it looks like you can define all kind of interesting traits to planets modifying the production of just about anything, including components and units. So in theory there is no impediment to having a planetary feature trait that reduces the WU (not resource or component, I think) cost of light jumpdrives or basic infantry built on a planet by 10%. You could apply this to all worlds of a specific type (e.g. give all primordial worlds a 50% malus to building every starship class) or randomly apply traits to worlds when a scenario starts (e.g. 10% of worlds created at scenario start gets one of a random selection of twenty possibly minor production modifiers to various components and units).
Top

You could even create interesting complex traits like this one, which I believe would be valid:

which would give you a world that gets a production bonus to all types of infantry, but also much more sensitive to stuff that would cause it to go into civil war.

I think you could get really fancy and have special improvements/structures that randomly occur on a small fraction of worlds independent of designation and which build special units that are not otherwise available, like alien shock troops and whatnot.
Top

It does make sense, for instance, that ocean, earth like and desert worlds get a bonus to food production. Perhaps worlds with hostile environments produce infantry in greater numbers (better survival skills or whatever), but the trade off is that they're more susceptible to rebellion and unrest (good idea, WTV!) Apparently in the old version you could also recruit alien legions, but at a risk of them turning against the population of the world they came from.

I've been reading through the manual actually, and there are a lot of interesting features which aren't actually implemented in the new online version of the game. For example, hunter-killers which can harass anonymously (which I would definitely be using!), penetrators and fighters. Of course we seem to have new units as well like gunships, and an array of starfrigates and starcruisers instead of the ubiquitous "starship" unit. Gunships do sound a lot like penetrators. LAMs I'm assuming are Partisan-class jumpmissiles.

One very interesting mechanic is "ambrosia" which is apparently some drug which boosts productivity of an empire's population (do correct me if I'm wrong, I haven't actually played this thing yet, just reading the notes online). However if the drug supply is cut off people get uppity and rebel on a massive scale. If one were to use this they would make sure to defend the ambrosia producing worlds VERY well, more so than capitals even.

I'm still browsing through the various mechanics of the old game, but it does seem to have a lot of depth in terms of grand strategy and choices to make in developing an empire, with appropriate trade-offs and/or rewards.
Top

Well I've just downloaded the 2.1 version and it looks a bit... dated, to say the least. Also its turn based not real time so that's another difference. What I think would be really useful and should definitely be introduced is a screen like this 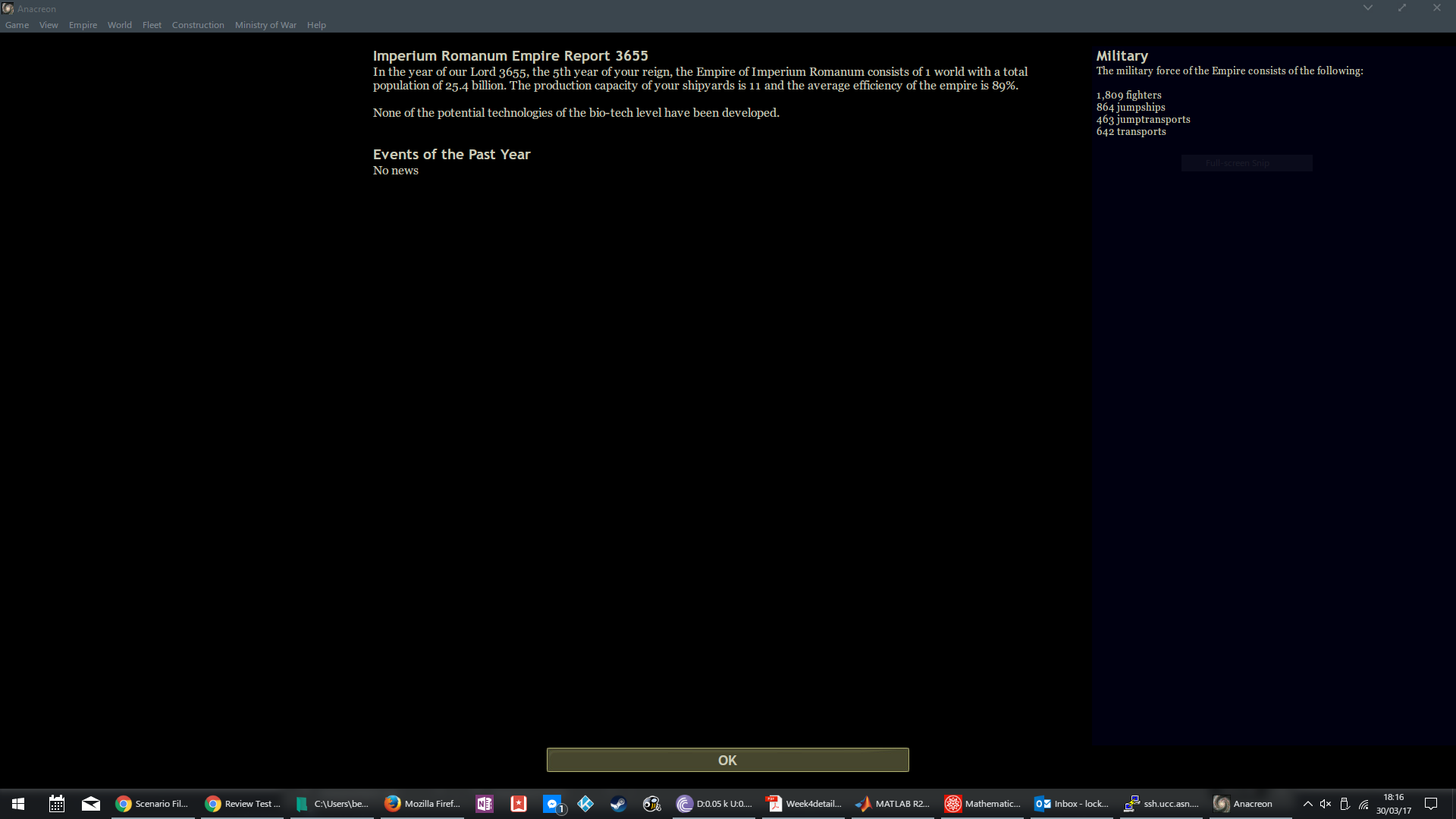 which pops up when the user logs in. We can see a list of all events (deaths, civil wars, rebellions, other empires capturing your worlds etc) together with a list of all military forces. A brief summary for flavor up top would also be nice.
Top

Desert worlds should be hostile to food production?

As for news screen, even just a tab on capital or button on empire tab to open a 'dialog box' with this info would be good, maybe a history of events too.
Top

Desert (and empyreal) worlds have a breathable or nearly-breathable atmosphere, so agriculture might be performed outside on the surface using natural sunlight. Desert worlds can be anything from Tatooine, Mars, Arrakis, Vulcan, etc. The "base" food production rate is for planets that have an unbreathable atmosphere and/or little sunlight, with agriculture being performed inside buildings or underground. So relative to the many various hostile world classes desert worlds do get a food production bonus, but they still produce much less food than a world with a biosphere like Earth's.
Top

If the list of tweaks/changes has been updated at all, now would be a good time to repost it here. I’ll link to it in postgame in tonight’s stream.

George can look at the pull request on github for the library changes. The only thing that we weren't able to address are the attackValues for the modified units (don't know the formula) and revisions to the prices at which Mesophon sells ships (these seem to be hardcoded). I also observed (but didn't attempt to address) a potential problem in that the FallenWorlds scenario generates player empire candidate capitals in bright nebulas, which normally exclude earthlike worlds.

I also suggest tweaking the names of planetary resource abundance traits or adding icons that show the modifiers they impart. I think players would benefit from the game explicitly stating that "minor trillum deposits" are actually "minor trillum deposits (-50%)". Additionally, the planetary biosphere traits should not have "hidden: true" - these traits impart production modifiers to organic food, but this is not well known because the game never explicitly states it.

I could do some commits to implement these too if people think they would be worthwhile and assuming George approved; since it's going a little beyond tweaking unit values I didn't want to get too ambitious in my first pull request.

One player also suggested a larger map (with the same planet count) for the next new game, although I don't know if capital ship speed is conducive to this. Maybe if it was just a little bigger, with more clustering of planets.
Last edited by Watch TV, Do Nothing on Thu Mar 30, 2017 9:08 pm, edited 7 times in total.
Top

I guess one issue we never addressed is the Hammerhead-GDM interaction in dark nebulas- with the proposed changes to GDMs, everything in dark nebulas will outrange GDMs except Stingers (which are protected against them) and explorers. It's not a huge concern for the time being, but it bears mentioning.

It looks like a couple ship classes don't orbit at their maximum range when engaging defenses. For example, I think I saw minotaurs engaging autocannons from an elevation of 15 MM, which is only 10 MM away from the satellites and would have put them in range of HEL cannons unnecessarily. I don't know if this is a new issue or not, other players let me know if you have also observed this.
Top

Ok cool, when exactly is the stream happening in GMT? On Twitch, is it? It's early morning Friday over here... I'd like to watch too

Stream is on Twitch, yes, and starts in about forty minutes as of this post. Here’s the link.

Any discussion of Anacreon during/after the stream? I wasn't able to attend.
Top

Yep - I mentioned your pull request.

- No mention of mesophon prices but I think that can be handled when he gets around to pulling the changes
- We might do a new map after the changes are pulled in
- Larger map sizes might be doable, but there may be memory issues with nebulae (needs looking into)
Project Renegade (Beta) : "The Poor Man's Corporate Command!"
Real programmers count from 0. And sometimes I do, too.
Top
Post Reply
43 posts